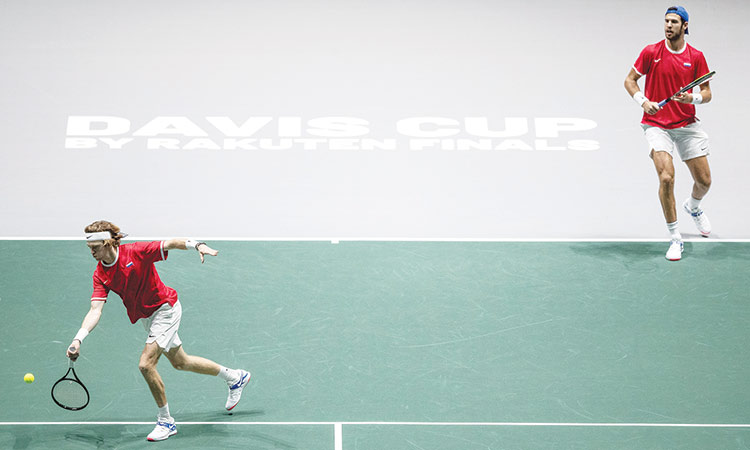 “When you’re playing not only for yourself, but for your country, you have to fight harder,” said Khachanov.

Russia, who are without US Open runner-up Daniil Medvedev due to exhaustion, can wrap up a place in the quarter-finals with victory over Rafael Nadal’s Spain in their second Group B tie.

The 18 nations have been split into six groups of three at the Caja Magica, with the pool winners and two best runners-up to play in the last eight of the first edition of the revamped tournament.

The teams face off in two best-of-three-set singles matches and one doubles rubber in each tie.

Khachanov and Rublev completed the clean sweep later on Monday with a 7-6 (7/3), 6-4 doubles win over Ivan Dodig and Nikola Mektic.

Canada claimed a 2-1 victory over well-fancied Italy to strike first in Group F.

Italy, who won their only Davis Cup title in 1976, were the favourites in Group F with Fognini and Berrettini both having enjoyed excellent seasons.

The 20-year-old Shapovalov saved three set points before snatching the first set in a tie-break, only for Berrettini to level the match in a second-set breaker. A clash without a single break of serve, was decided by another tie-break, with Shapovalov reeling off the last three points to win after two hours and 52 minutes on court.

Berrettini and Fognini boosted Italy’s hopes of making the quarters with a hard-fought doubles success over Shapovalov and Pospisil, winning 6-2, 3-6, 6-3.

Canada take on the US in their next match, with Italy facing the Americans the following day.

Belgium made a victorious start in Group D with back-to-back singles wins against Colombia.

The South Americans are playing at the top level of Davis Cup tennis for the first time, having never played in the old World Group.

Steve Darcis saw off Santiago Giraldo 6-3, 6-2, before world number 11 David Goffin had to battle back from a set down to avoid a shock against 194th-ranked Daniel Elahi Galan Riveros, winning 3-6, 6-3, 6-3.

But the world number one doubles pairing of Juan Sebastian Cabal and Robert Farah grabbed a historic win for Colombia by battling past Sander Gille and Joran Vliegen 6-7 (5/7), 6-4, 7-6 (7/3).

Meanwhile, Andy Murray believes negativity around the reformed Davis Cup has been unfair and is urging people to give the new competition a chance to succeed.

The inaugural Finals of the 119-year-old tournament started on Monday in Madrid, where 18 teams will now compete across the week at the Caja Magica for the chance to play in Sunday’s final.

Barcelona footballer Gerard Pique has been at the heart of the changes after his marketing company Kosmos struck a $3billion deal over 25 years with the International tennis Federation.

“I think generally people have been fairly negative about the new concepts,” Murray said in a press conference on Monday.

Participation from the game’s top players had dwindled as the previous system required winning teams to play four weekends across the year.

Organisers hope the prestigious trophy can be revitalised in a more congested format, with Murray, Novak Djokovic and Rafael Nadal all in attendance this week.

“They’ve done a really good job with the facilities,” said Murray. “The team room is really good, the food and the transport has been good. There’s nothing really to complain about so far.

“It feels like there’s a few people that want to bash the event before it’s started. I think they have to let that go and wait for the event to finish before we give a fair view on what this event is now.”

Roger Federer and Alexander Zverev are the most high-profile absentees while there are concerns too about the atmosphere at matches.