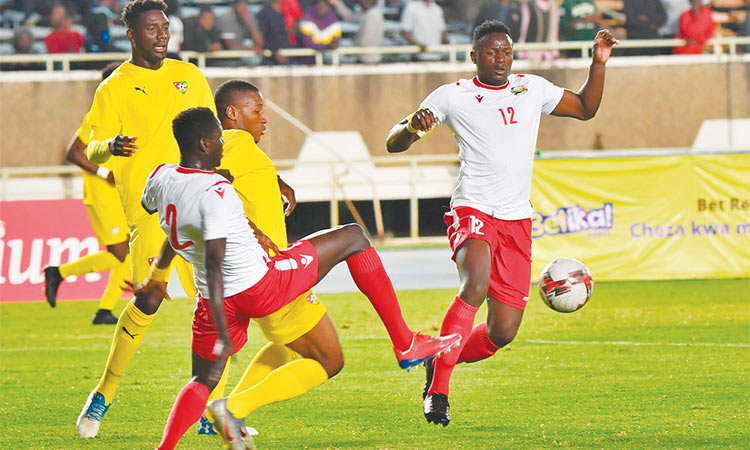 Youcef Belaili scored direct from a corner to give defending champions Algeria a 1-0 away win over Botswana Monday during matchday two of 2021 Africa Cup of Nations qualifying.

The Saudi Arabia-based winger took advantage of a strong wind in Gaborone to curve the ball over goalkeeper Kabelo Dambe into the far corner of the net on 14 minutes.

It proved the only goal of a foul-riddled match that ended with the home side down to 10 men after Gape Gaogangwe was sent off six minutes from time.

Fluid football was scarce on a hard, bumpy National Stadium pitch described by one commentator as “like trying to play in a car park”.

Algeria lacked captain and Manchester City winger Riyad Mahrez, who was excused from a journey covering virtually the length of Africa because of undisclosed “personal reasons”.

The trophy-holders top Group H with a maximum six points after they thrashed Zambia 5-0 in Blida last Thursday.

Meanwhile, a brilliant goal from Johana Omollo was not enough to give Kenya a Group G victory in Nairobi as Togo recovered to force a 1-1 draw.

Omollo struck on 35 minutes by unleashing an unstoppable shot from outside the box only for Hakim Ouro-Sama to equalise with a header off a corner 19 minutes into the second half.

Ghana also maintained a perfect start to qualifying for the 2021 tournament in Cameroon by winning 1-0 in Sao Tome e Principe through a 50th-minute penalty from Jordan Ayew.

The in-form Crystal Palace forward calmly planted the ball in the net after a foul on Emmanuel Boateng.

Ghana lead Group C with six points, South Africa and Sudan have three each and Sao Tome are pointless.

In the same group, the Comoros held record seven-time African champions Egypt to a 0-0 draw which, coupled with a surprise win in Togo last week, placed them first with four points.

Kenya and Egypt have two each, and Togo one under veteran French coach Claude le Roy, who has not had the same success with the Sparrow Hawks as with other African national teams.

Hundreds of Comorans raced on to the pitch in Moroni at full-time to celebrate the island nation off Mozambique holding a team 93 places higher in the world rankings.

Both sides came closest to breaking deadlock in the second half with Aston Villa midfielder Mahmoud ‘Trezeguet’ Hassan firing wide when one-on-one with goalkeeper Ali Ahamada.

In other groups, the Gambia and Mozambique scored in stoppage time to force 2-2 draws with the Democratic Republic of Congo and Cape Verde respectively.

Bubacarr Jobe was the 92nd-minute Gambian saviour in Bakau after the Congolese had twice led through Cedric Bakambu and Jackson Muleka.

The Gambia and Gabon share first place in Group D with four points each, twice African champions DR Congo have two and Angola are pointless.

Witi rescued his country with a 92nd-minute goal as they came from behind twice to hold Cape Verde in Praia.

Garry Rodrigues in the first half and Ryan Mendes put the Blue Sharks ahead and the first Mozambican equaliser in the Group F match came from Edison Mexer.

Mozambique and Cameroon have four points each, Cape Verde two and Rwanda none. The Cameroonians qualify automatically as hosts but are playing to get competitive match practice.