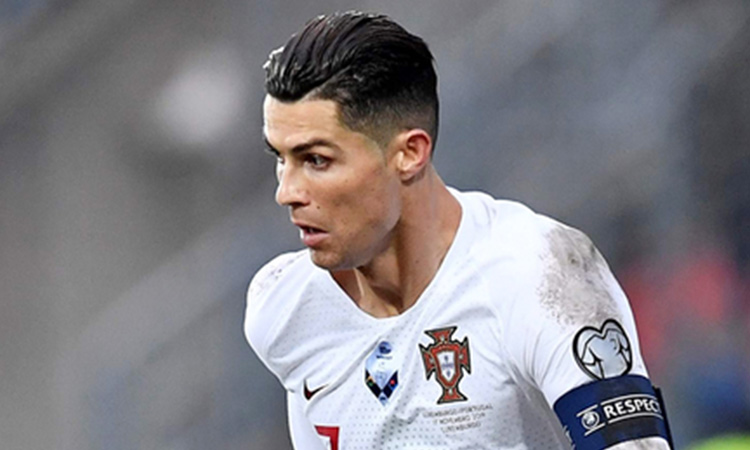 Portugal’s Cristiano Ronaldo controls the ball during their UEFA Euro 2020 Group B qualification match against Luxembourg on Sunday. Agence Frane-Presse

Bruno Fernandes struck the opening goal on 39 minutes before Ronaldo tapped in a scrappy second late on to clinch second place in Group B behind winners Ukraine, who drew 2-2 in Serbia.

Portugal became the 17th nation to qualify for next year’s multi-host tournament, which kicks off in Rome on June 12, joining the likes of world champions France, Spain, Italy and England.

Fernando Santos’ side knew they would book their place at Euro 2020 with a win or by matching Serbia’s result from their game in Belgrade.

But Portugal were made to work hard on a heavy pitch by a Luxembourg team ranked 96th in the world that notably held France to a 0-0 draw in 2018 World Cup qualifying.

Ronaldo, who smacked in a hat-trick in Thursday’s 6-0 thrashing of Lithuania, moved to the brink of his international century four minutes from time.

Silva’s far-post cross was forced towards goal by Diogo Jota, with Anthony Moris getting a hand to the ball before Ronaldo turned in from the goalline.

Earlier, the Netherlands, Germany and World Cup finalists Croatia became the last big hitters to qualify on Saturday as the trio booked their places at next summer’s finals.

Austria also made it through to the multi-host tournament, which kicks off on June 12, with 16 sides now ensured of a spot at the 24-team event and only four places remaining from the main qualifying route.

They join other big names such like world champions France, Spain, Italy and England, who will all fancy their chances come kick-off at the opening match at Rome’s Stadio Olimpico.

Ronald Koeman’s resurgent Dutch needed a point to qualify for their first major tournament since coming third at the 2014 World Cup and got what they needed in a scrappy goalless draw with Northern Ireland in Belfast.

However they were far from the flamboyant outfit that has so often thrilled in Group C, and survived a huge scare when Steven Davis smashed a first-half penalty high over the bar.

The Dutch dominated possession and stopped the hosts from having a single shot on target but failed to create much themselves.

Davis’ spot-kick blunder left Michael O’Neill’s side third and hoping for a way into the tournament via the playoffs.

The draw allowed fierce rivals Germany to move top in the group as Toni Kroos hit a brace in a simple 4-0 win over Belarus in Moenchengladbach which saw them qualify for the Euros for the 13th time in a row.

A deft back-heeled goal from defender Matthias Ginter just before the break and impressive finishing by Leon Goretzka and Kroos gave the Germans a comfortable three-goal lead early in the second half. Captain Manuel Neuer produced a superb save to keep out Belarus striker Igor Stasevich’s penalty before Kroos dribbled through the defence to claim his second goal seven minutes from time and make sure of a routine win.

A win over Northern Ireland in Frankfurt on Tuesday will guarantee Loew’s new-look side first place.

Croatia survived a scare to secure their place in the Euros after coming from behind beat Slovakia 3-1 in Rijeka.