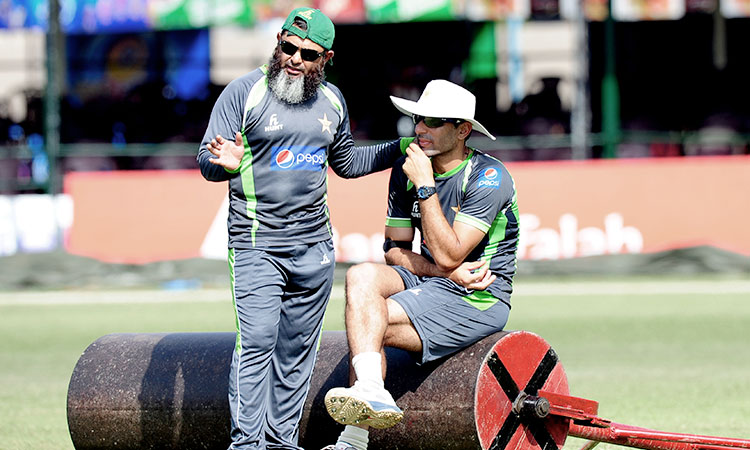 Mushtaq Ahmed (left) feels that it is important for India and Pakistan to play against each other because fans want to watch them play. File / Agence France-Presse

Former Pakistan leg-spinner Mushtaq Ahmed has called for the resumption of cricketing ties between India and Pakistan in order to improve bilateral relationship between the two neighbouring countries.

The two nations have not been involved in any bilateral series for a long time and have been meeting only at the ICC events. The last bilateral series took place in 2012-13 when India hosted Pakistan for three ODIs and two T20Is.

“I think cricketing ties should resume between India and Pakistan. I feel cricket has the ability to bind the two nations and improve their relationship. Cricket brings love, it brings joy and happiness to the fans.

“Thus, it is important for both the countries to play cricket against each other because fans want to watch them play,” Mushtaq told said on the sidelines of the ongoing Abu Dhabi T10 league.

“Whenever India and Pakistan meet, the cricket is highly competitive. In fact, the India-Pakistan series is bigger than the Ashes,” he stated.

The relations between the two Asian neighbours have further nosedived since Aug. 5 when the Indian government abrogated Article 370 of the Constitution, thus ending the special status granted to Jammu and Kashmir.

However, the recent opening of the Kartarpur Corridor is being seen as a positive step towards improving the bilateral relationship.

“When we will play cricket, things will become easier. It provides politicians with a great opportunity to communicate and set things on the right track. And that’s why I think communication needs to be there between the two governments,” the 49-year old said.

“Both the countries should sit and discuss the situation and their problems. The recent opening of the Kartarpur Corridor is a great initiative for both the nations. All issues can be solved when communication takes place. And sports, particularly cricket, can play a very big role in improving the bilateral ties between India and Pakistan,” he said.

Talking about the recent performance of his home team, Mushtaq said that Pakistan cricket at present is going through a transition phase and with time, their performance will improve.

In this year’s ODI World Cup, the Men in Green failed to qualify for the knockouts. After that, they lost a T20I series against Sri Lanka at home. Currently, the team is in Australia where they lost the T20I series and are now preparing for the Test matches.

“I think Pakistan cricket is going through a transition phase. There’s a change in management. Misbah-ul-Haq is now the head coach. Captains in all formats have been changed. So this Pakistan team needs time to improve and progress,” he said.

According to Mushtaq, Pakistan players at present are not secure about their position in the team and that in turn is affecting their performance.

“Whenever a captain or a player of any team is insecure about his position in the side, it becomes very difficult for him to execute his plans and express himself. So, I think Pakistan right now needs a consistent run and Misbah needs time. When these two things will click, I am sure they will emerge as a successful team,” Mushtaq said.

On the ongoing T10 league where Mushtaq is serving as the coach of Deccan Gladiators, he said, “I personally believe that the T10 format can help players develop temperament for T20 cricket. There will be failures for sure, but it will make T20 cricket very easy for the players.”

He also advised left-arm Indian Chinaman Kuldeep Yadav to add more variety to his bowling in order to make a return to the national side. “The way cricket is going, bowlers, especially spinners, have to be innovative. They need to have some mystery angle about them,” Mushtaq said.