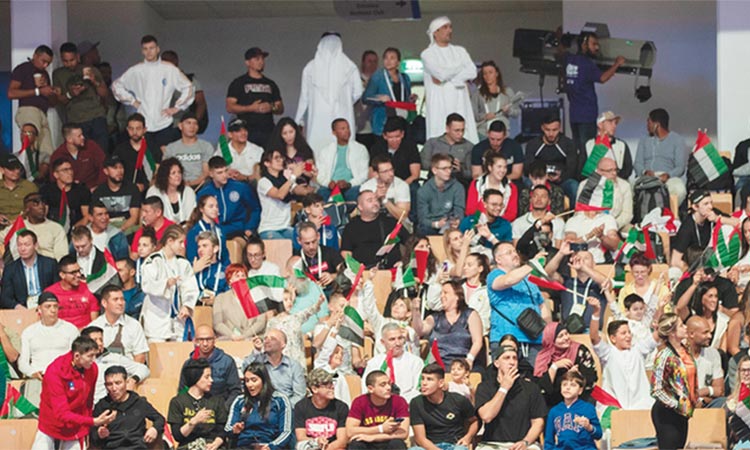 UAE athletes enjoy an exuberant home support at the tournament.

The Ju-Jitsu World Championship, the tournament that brings the best Ju-Jitsu athletes from all over the world on one elite platform, kicked off at the Mubadala Arena in Abu Dhabi on Saturday and will run till Nov.24.

The UAE National Team will have 76 athletes across the men’s and women’s categories competing in different belts and weight classes along with more than 1500 athletes from 69 countries.

With the Jiu-Jitsu World Championship coming to UAE’s capital, excitement ran high. A large crowd of Jiu-Jitsu enthusiasts, family and friends of participating athletes, and fans made a beeline for the Mubadala Arena equipped with flags, banners, and filling the arena with vociferous cheers.

Mohammed Al Shehhi, father of Khaled Al Shehhi who is representing the UAE in the 60 kg division in the under-18 category, was ecstatic about watching his son compete and potentially make the Nation proud.

“Myself and my entire family have a deep love for the sport of Jiu-Jitsu. It is a very happy moment for all of us to see Khaled taking the mat and do his best to make the UAE proud with a strong performance.

“I have been tracking his preparations in the build-up to the tournament and I am confident that he will end up amongst the medals. The kind of support that UAE athletes are getting in this arena will surely encourage all of them to push harder on the mat,” he said.

The UAE has gradually developed a deep bond with Jiu-Jitsu and the sport’s connection with youngsters is rapidly growing.

Mohammed Talal Al Kaabi, a 15-year-old spectator said that he was a keen Jiu-Jitsu practitioner and coming to the World Championship was an ideal way for him to watch elite athletes from close quarters.

“I am confident that the UAE team will win lots of medals because of the quality and preparations of our athletes. I am here today because I want to support my country and this sport with all my energy. I am very excited about watching athletes from the UAE National Team compete because I am sure I can learn a lot from them that will help me become a better Jiu-Jitsu athlete myself,” he said.

For Asma Al Subaihi, who competes in the 63 kg class in the under-21 division, the presence of her sister Ghala Abdul Nasser Al Subaihi was a motivating factor and helped put her mind at ease.