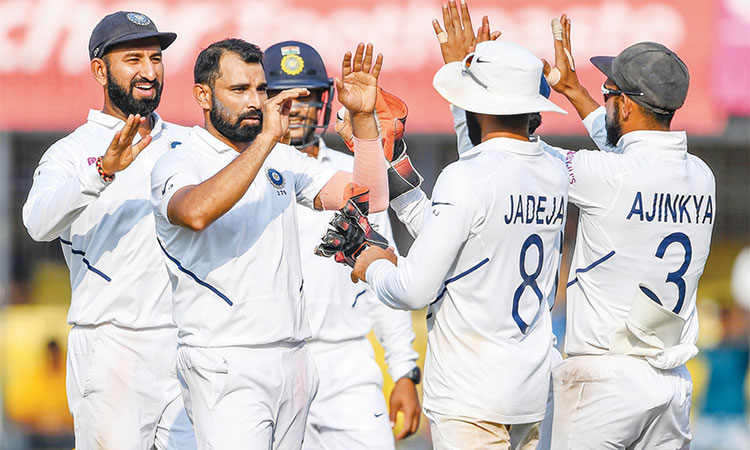 India’s Mohammed Shami (second left) celebrates with team-mates after the dismissal of Bangladesh’s Taijul Islam on day three of the first Test match in Indore on Saturday. Agence France-Presse

Mohammed Shami took four wickets as India crushed Bangladesh by an innings and 130 runs inside three days of the opening Test on Saturday. This, after India declared their first innings on 493 for six, garnering a lead of 343 runs.

Shami’s fellow fast bowlers Umesh Yadav and Ishant Sharma shared three wickets between them as Bangladesh were bowled out for 213 in the final session in Indore.

The visitors’ gamble to bat first after winning the toss backfired badly against the Indian pace attack.

“The captain gave me the freedom to bowl the way I wanted and it went well,” Shami said after the game.

“Having Umesh and Ishant alongside me is a plus.”

Mushfiqur, who scored 43 in Bangladesh’s 150 in the first innings, finally became one of three wickets taken by off-spinner Ravichandran Ashwin.

Ashwin, who reached 250 wickets in home Tests in the first innings, got last man Ebadat Hossain for one to spark India’s victory celebrations.

Opening batsman Mayank Agarwal played a key part in the win with his 243 -- his second double century in four Tests — as India amassed 407 runs on the second day. The bowlers kept up the pressure when Bangladesh started their second innings.

Yadav drew first blood, taking Imrul Kayes for six on a ball that curved into the left-hander and rattled the leg stump.

Ishant Sharma got Shadman Islam for six in the next over. Shami then trapped skipper Mominul Haque lbw for seven.

Mominul was given not out by the on-field umpire but India skipper Virat Kohli successfully reviewed the decision with replays showing the ball would have hit leg stump.

The second and final match is a day-night clash, with India hosting its first-ever pink-ball Test at Kolkata’s Eden Gardens from Nov.22.

“Don’t know what to say, another clinical performance,” Kohli said after the win.

“These guys (our pacemen) are on top of their game, when they bowl, it looks like any pitch is a good pitch.

“Jasprit (Bumrah) isn’t here but this is a dream combination for any captain. Having strong bowlers the most important thing in any team.”

Shami and Yadav shared 24 wickets between them in India’s recent 3-0 Test sweep of South Africa.

“Very professional with the bat, playing five batters with one guy taking responsibility is what we want with overseas tours coming up,” said Kohli. “Hats off to the boys.”

“Shami has always had the speed. I think he presents probably the best seam position in world cricket,” India’s bowling coach told reporters.

“There is a perfect balance between fitness and the bowling he does. I think that works very well for Shami and that’s the secret behind it.”

Bangladesh skipper Mominul said the batting of Mushfiqur and bowling of Abu Jayed had been the only “positives” in the disappointing defeat.

Abu stood out with his four wickets in the Indian innings but got little support from his teammates.

Result: India won by an innings and 130 runs