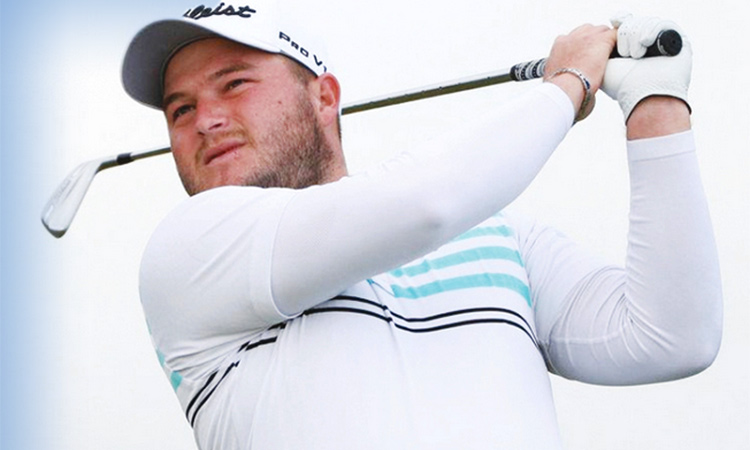 South Africa’s Zander Lombard in action during the second round of the Nedbank Golf Challenge at the Gary Player Country Club on Friday. Reuters

A seven-under-par 65 saw South Africa’s Zander Lombard surging into the lead at the end of the second round of the Nedbank Golf Challenge at the Gary Player Country Club on Friday.

Lombard started the week in 76th place on the European Tour’s Race to Dubai and was an outsider to qualify for next week’s Tour championship in Dubai, which is reserved for the top 50 players on the order of merit.

But if he can hold on and win the $2.5-million first prize he will leap to 13th in the standings.

“I’m trying not to think about that,” said Lombard of the possibility of a huge payday. But he said he was keen to qualify for Dubai.

“It’s the pinnacle of the year and you want to play it.”

The powerfully-built 24-year-old from Pretoria, with a two-round total of 11-under-par 133, went past fellow countryman Louis Oosthuizen, who was unable to repeat the heroics of his first-round 63.

Oosthuizen trailed Lombard by two shots after a making three birdies and three bogeys in an even-par round of 72.

Belgium’s Thomas Detry was third, two strokes further adrift, after an adventurous round of 71 which included five penalty shots.

Lombard dropped a shot on the first hole but then played flawless golf, making six birdies and an eagle on the par-five tenth when he holed a putt from the fringe.

Detry briefly held the lead at 10 under par when he birdied the par-three 12th hole.

He earlier had to take three off the tee on the third hole when he drove the ball deep into bushes and took a penalty drop after another wayward drive on the eighth. He escaped with bogey on both occasions.

But a third errant drive on 17 proved more costly.

The tee shot requires a long carry over water and Detry pulled his drive into the lake and needed to play three off the tee for the second time in his round.

It could have been five off the tee but his second drive, which was seemingly headed for more disaster, hit a windsock pole on the edge of the water and bounced into play. He made a double-bogey six.

Detry made five birdies and an eagle but had four bogeys and a double bogey.