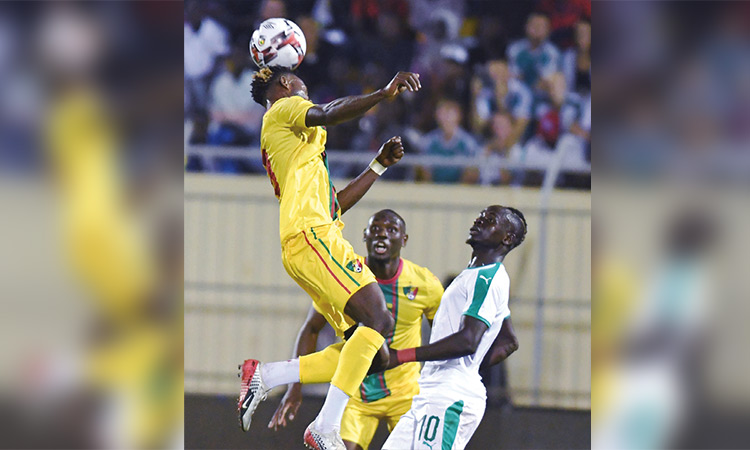 Senegal’s Sadio Mane (right) vies for the ball with Congo players during their Africa Cup of Nations qualifying game on Wednesday. Reuters

Senegal cruised to a facile 2-0 win against Congo Brazzavill despite Liverpool star Sadio Mane failed to score at the 2021 Africa Cup of Nations qualifiers on Wednesday.

France-based duo Sidy Sarr and Habibou Diallo were on target as they put Senegal ahead within three minutes of the kick-off and assured three points for their team.

Senegal are bidding for the maiden Cup of Nations crown, having finished runners-up twice as Algeria denied them the title last time in 2019.

Mane and Napoli centre-back Kalidou Koulibaly are the stand-out players in a team expected to win Group I, where Guinea-Bissau overcame eSwatini (formerly Swaziland) 3-0 in the other fixture.

Nigeria, third at the recent Cup of Nations, fought back to defeat Benin 2-1 in southeastern city Uyo with Samuel Kalu scoring the second half match-winner.

Veteran Stephane Sessegnon gave Benin an early lead they retained until the stroke of half-time when Victor Osimhen levelled by converting a penalty.

Benin eliminated highly-fancied Morocco at the last-16 stage of the Cup of Nations in Egypt last July and took Senegal to the wire before making a quarter-finals exit.

In the other Group L match, Jane Thabantso netted in the final minute to earn Lesotho a 1-1 draw away to Sierra Leone, who had taken a 72nd-minute lead through Kwame Quee in Freetown.

Cameroon, automatic 2021 tournament participants as hosts, are taking part to get competitive match practice and began disappointingly when held 0-0 at home by Cape Verde in Group F.

The Indomitable Lions went to Egypt this year as defending champions, but managed only one win in four matches and were eliminated by Nigeria in the round of 16.

With Cameroon guaranteed one of the two qualifying places, Cape Verde will battle with Mozambique and Rwanda for the other slot. The shock among the first 11 qualifiers of 144 was the Gambia coming from behind to win a Group D match 3-1 in Angola.

After Wilson Eduardo put the Angolans ahead in the third minute in Luanda, Switzerland-based Assan Ceesay netted twice within 60 seconds midway through the opening half to turn the tide.

Another Europe-based professional, Sulayman Marreh, got a third goal one minute from time as the Gambia avenged home and away 2022 World Cup qualifying losses to Angola two months ago.

The widest winning margin was achieved by Sudan, who walloped Group C outsiders Sao Tome e Principe 4-0 in Khartoum, where the losers were reduced to 10 men by a 22nd-minute red card.

Defending champions Algeria debut Thursday at home to Zambia and will be defending a 16-match unbeaten record since losing a 2019 Cup of Nations qualifier in Benin.

CAN qualifiers results on Wednesday: