Chile’s footballers refuse to play Peru friendly due to crisis 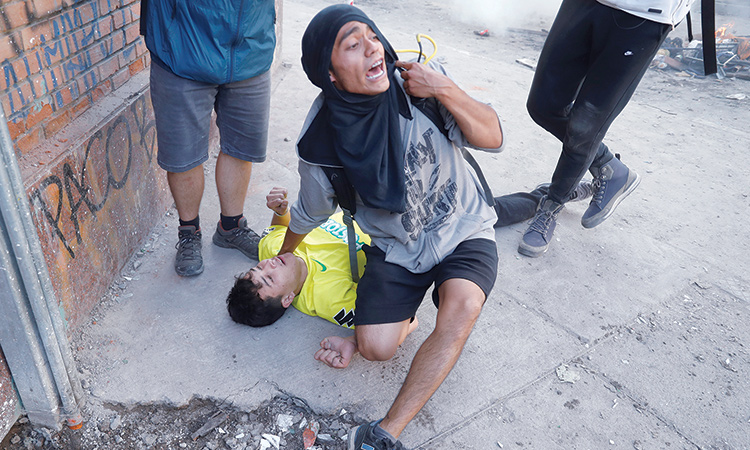 A demonstrator shouts as he helps another injured demonstrator during a protest against Chile’s government in Santiago, Chile on Thursday. Reuters

Chile’s footballers have refused to play in next week’s friendly against Peru due to the weeks-long crisis in their country, the football association (ANFP) said in a statement on Wednesday.

Coach Reinaldo Rueda has released all his players back to their clubs. Chile were due to play neighbors Peru, who beat them in the Copa America semi-finals in Brazil in July, in a friendly in the Peruvian capital Lima on Tuesday.

“We’re footballers but above all we’re people and citizens,” Chile’s captain Gary Medel, who plays in defence for Bologna in Italy, wrote on Twitter.

“Right now Chile has much more important priorities than next Tuesday’s match.”

The decision was taken following “a team meeting” on Wednesday morning at Chile’s training center on the outskirts of the capital Santiago, ANFP said. ANFP said it had informed its Peruvian counterparts of the decision.

Upon arriving in Lima from their clubs earlier this week, some players expressed a reluctance to play the match.

“There’s a difficult atmosphere and in my opinion we shouldn’t play out of respect for what’s happening in the country,” Bayer Leverkusen’s 74-time capped midfielder Charles Aranguiz said on Tuesday.

Several players have expressed support for the protest movement against President Sebastian Pinera that descended into violence on October 18 and has since left 21 people dead.

Demonstrators angry at social and economic inequality are demanding constitutional changes and that Pinera resign.

“There’s a more important match, which is that of equality so that all Chileans live in a fairer country,” said Medel.

“We support the demonstrations, but without violence and without injuries, as much on the side of the protesters as the armed forces.” As well as the dead, some 2,000 people have been injured, 200 of which suffered eye injuries from pellets fired by security forces.