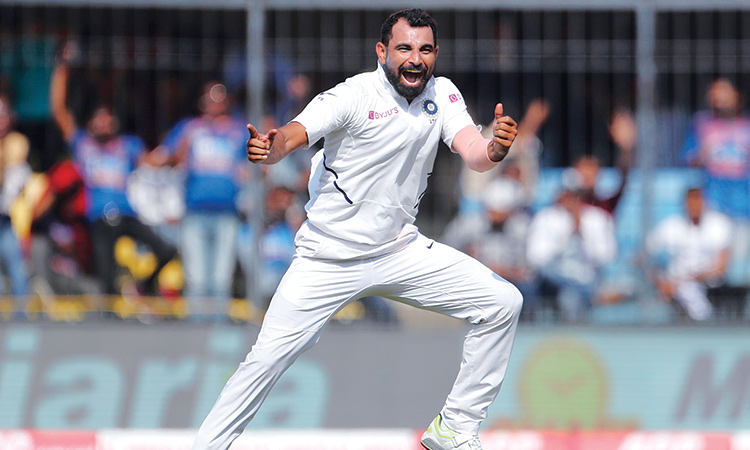 India’s Mohammed Shami celebrates the dismissal of Bangladesh’s Mushfiqur Rahim during the first day of their first Test match in Indore on Thursday. Associated Press

Hot on the heels of a sobering T20 loss in the just-concluded T20 series, touring side Bangladesh found themselves in dire straits against hosts India at the end of play on the first day of their two-Test series which began at Indore on Thursday.

On a Holkar Cricket Stadium pitch that early assistance to the quicks, Mohammed Shami led an inspired pace attack to put India on top after they bundled out Bangladesh for 150 in the first Test on Thursday.

India were 86 for one at stumps after Rohit Sharma was caught behind off paceman Abu Jayed for six.

Mayank Agarwal, on 37, and Cheteshwar Pujara, on 43, put on an unbeaten 72-run stand to see off the day’s play.

Agarwal survived a reprieve on 32 when Imrul Kayes dropped an easy chance at slip off Abu. Pujara looked solid in his 61-ball stay so far as he hit seven boundaries.

But it was the Indian bowlers who stood out after Bangladesh skipper Mominul Haque elected to bat on a green wicket at the start of the two-match series.

Yadav, Sharma and Shami took wickets in the morning session before Mushfiqur, who top-scored with 43, and Haque put on 68 for the fourth wicket.

Spinner Ravichandran Ashwin broke the stand after getting Mominul bowled for 37. It was his 250th wicket in home Tests, and he added to the tally by then bowling Mahmudullah for 10.

Shami ended Mushfiqur’s resistence and struck on successive deliveries to stop the Bangladesh tail from wagging.

Taijul Islam then played out Shami’s hat-trick ball after the break, but was later run out for one. Yadav cleaned up Ebadat Hossain to wrap up the innings in 58.3 overs.

At the start, Bangladesh endured three maidens before getting their first run through Imrul, but he managed just five more before becoming the first wicket.

Sharma struck in the next over to send Shadman Islam back to the pavilion, also for six.

Batting remained tough for Mominul and Mohammed Mithun, who was trapped lbw for 13 by Shami finding swing and seam movement.

It could have been worse for Bangladesh had India not been sloppy in the field.

Rahane, who spilled three chances at first slip, dropped Mominul when he had made only three, and Mushfiqur survived when put down by skipper Virat Kohli at third slip.

Bangladesh, who lost the preceding Twenty20 series 2-1, had a troubled build-up when star player and captain Shakib Al Hasan was banned for two years, with one year suspended, for failing to report approaches by bookmakers.

The series is Bangladesh’s first in the new world Test championship currently led by India.


Brief scores at end of play on day 1: 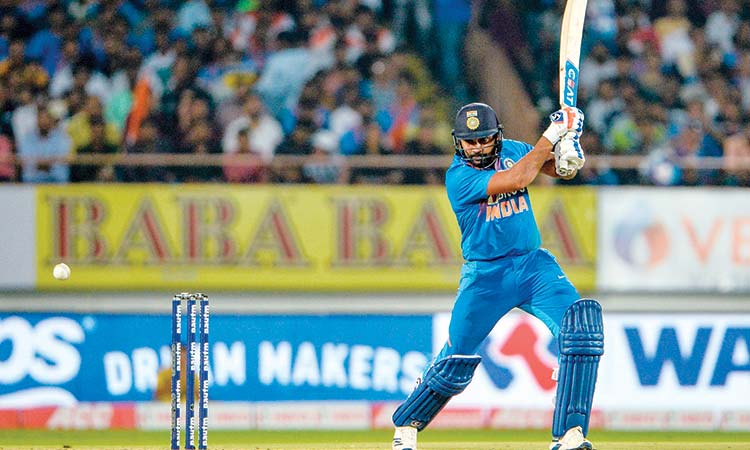