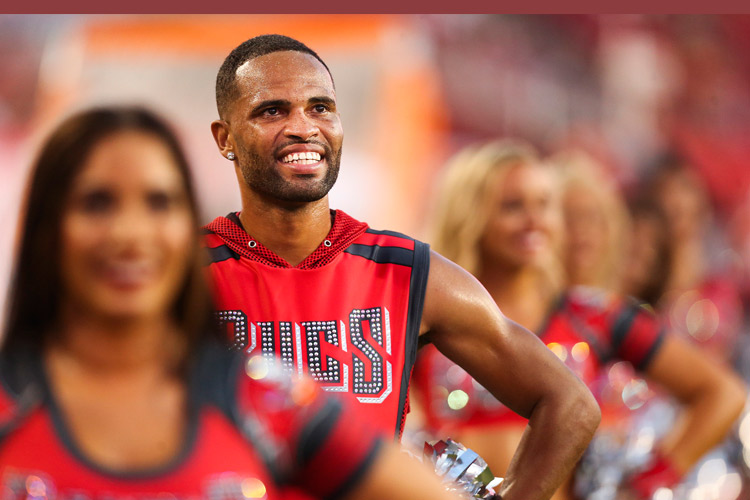 Lorenzo Gilbert is one of six rookies on the Buccaneers' 32-member squad and one of a growing number of male cheerleaders throughout the NFL. TNS.

Lorenzo Gilbert ran track as a kid and played a little American football with his brothers in Miami, but wasn't one to have his eyes glued to the television on Sundays rooting for any National Football League (NFL) teams or favourite players.

But now here he is, in the NFL, on the field, rooting for the Bucs at every home game. Gilbert, 32, is the team's first male cheerleader, one of six rookies on the Buccaneers' 32-member squad and one of a suddenly growing number of male cheerleaders throughout the NFL.

"It's a big role because at the end of the day, they can never take away the fact that I was the first," Gilbert said. "It's scary at times because you never know how some people may perceive it because it is unfamiliar territory, but my goal is to do the best I can possibly do and just hope that that inspires others."

Tara Battiato, the Bucs' senior cheerleader manager, said that men have tried out for the team before, but none could match the skill set of Gilbert, who emerged from more than 100 candidates during tryouts for this season's squad.

"You have to be an elite dancer cheerleader to be on our team regardless of gender," Battiato said. "It's hard to be a member of our team, and we have hundreds of candidates every season that don't make it because they're not qualified. ... If this inspires men, women, anyone to come out and be a part of our team, that just makes everything better." 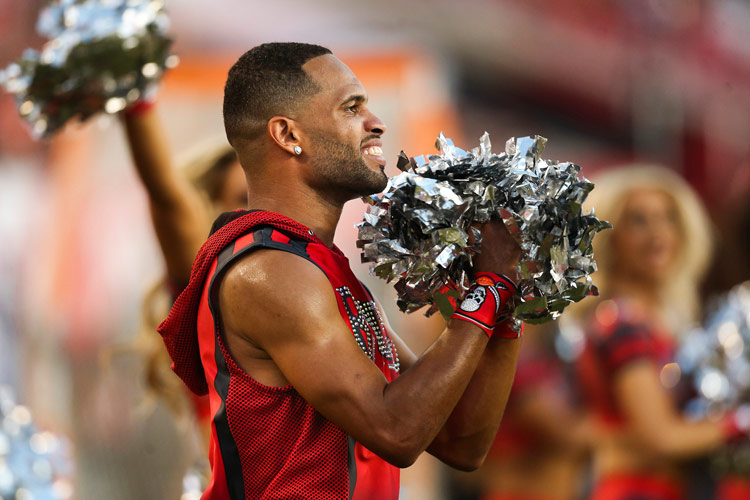 Lorenzo Gilbert on the sidelines with his cheer team as the Bucs take on the Cleveland Browns at Raymond James Stadium on Friday, Aug.23, 2019 in Tampa, Florida. TNS.

This season, Gilbert is among 17 male choreographed dance cheerleaders representing NFL teams. The Seahawks' squad has eight males, and this year changed its name from the Sea Gals to the Seahawks Dancers. The Saints squad, the Saintsations, now has three men. The Patriots have two, the Eagles one and the Titans one.

A dancer and choreographer with Event Show Productions in Ybor City, Gilbert held an interest in trying out — he was looking for a place where he could dance and "really sweat" — but he initially hesitated to try out. Brittany Dahlberg, a co-worker, fourth-year Bucs cheerleader and second-year captain on the squad, encouraged him.

Still, Gilbert's technical training in modern dance — he studied at New World School of Arts in Miami — was much different than the sharp, hard-hitting movements that cheerleaders perform in their routines.

"He was all in from the jump," Dahlberg said. "He said this was something he knew he wanted to do. He seemed a little more nervous than a typical gig because this is a huge deal. It's the NFL, it's not just a little side gig. I tried to hold his hand along the way, telling him, 'You got this.' I could tell he really wanted it deep down, and he showed that through the entire process. This is what his dream was."

I love to dance. I love to entertain. I love to show people the gift that God has given me and that in itself it's just a joyful feeling.

Gilbert said the squad immediately embraced him and that he's never had a better support team than he does with his fellow cheerleaders. But the sudden recognition he received caught him off guard. Much of it proved encouraging, but jarring: fans coming up to him at dinner asking for a photo.

But when Gilbert created an Instagram account, the comments he received varied dramatically. "I was on a plane with my coworkers and I'm just crying on the plane like, 'These people are so cruel (with their comments),' and one of my coworkers said, 'Don't read the comments, you should never read the comments.' And I just think that since I have tough skin I always have to know that there's going to be good and bad and just take it for what it is and just be the best you."

So when the Bucs played their first home game this week, Gilbert was there, smiling and sweating. "I take joy every time I'm on the field," Gilbert said. "It's what I love to do. I love to dance. I love to entertain. I love to show people the gift that God has given me and that in itself it's just a joyful feeling, so to be on that field, I'm always excited and happy, even when I'm full sweating and look a mess, I'm out there, whole smile, just happy to be there."