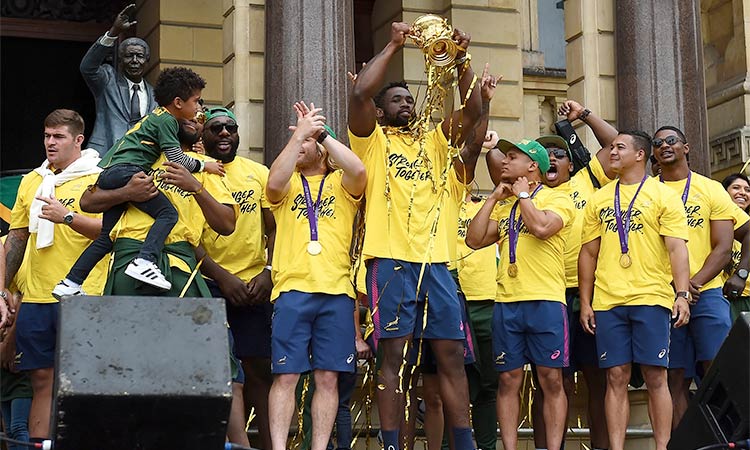 The South Africa rugby team celebrate with the trophy in front of a statue of the late former President Nelson Mandela at the Cape Town City Hall on Monday. Associated Press

Warren Gatland turned down an offer for applying for the position of New Zealand head coach, it was confirmed by the former Wales boss himself on Tuesday.

Gatland, in an interview, said he rather wants to coach Waikato Chiefs club and coaching the British and Irish Lions in 2021.

New Zealand rugby invited 26 coaches for the All Blacks head coach job, which has been vacant following the departure of Steve Hansen, who relinquished the job after the World Cup.

Hansen ahd previously pointed out if Gatland wanted his name to be considered then he would have to step down as Lions boss.

“It was nice to be contacted. I politely declined putting my name forward,” Gatland said.

Gatland said if the chance to coach the All Blacks arose again in the future he would consider it, but if not then he had no regrets.

“I’m a great believer in what will be will be,” he said.

“If you are successful, other opportunities will come along. It was time for me to make a decision to leave Wales and the northern hemisphere and come back to New Zealand and I’m excited by that.” Gatland will coach the Barbarians against his former Wales side on December 1 before returning to New Zealand to take over the Super Rugby club Chiefs on a four-year contract which includes a sabbatical to coach the Lions.

His 12 years with Wales ended when they were beaten by the Hansen-coached All Blacks in the play-off for third at the recent World Cup.

Meanwhile, South Africa’s rugby stars on Monday hoisted the World Cup before thousands of ecstatic fans at Cape Town’s City Hall, where Nelson Mandela made his first speech after his release from prison.

The Springboks’ final stop on their victory tour pounded home the message of unity in a country still nursing the wounds of apartheid a quarter-century after its end.

“Look how we are all different, different races, different backgrounds, and we came together for South and we made it happen,” Siya Kolisi, the Springboks’ first black Test captain, told thousands of fans.

“I’m saying to you today, just take a look around you, there is different races, different people with different backgrounds, but look how you are making it special for us.”

“It’s time for us South Africans to stop fighting, to stop arguing... and move forward as a country,” he said, to wild applause from fans in the vast square.

It was in that same square in front of City Hall on February 11, 1990, that Nelson Mandela spoke to euphoric crowds hours after his release from 27 years in prison.

That was Mandela’s first major speech as a free man and a key moment in South Africa’s rebirth as white-minority rule crumbled.

The Springboks beat England 32-12 victory against England in Japan on November 2, earning their third world crown in rugby’s paramount tournament.

But this team broke new ground, being the most racially-mixed in a national sport which was once the preserve of the white elite.

“What this group of youngsters has achieved speaks, beyond rugby, to the possibility of what we can be. No matter where we come from, if we reach for the stars, we can actually touch them,” said Tutu in a statement.

Dwarfed by most of the squad, Tutu appeared particularly impressed by Trevor Nyakane and Tendai Mtawarira’s size — while scrum half Faf de Klerk gave the archbishop a glimpse of his “famously patriotic underwear he revealed to Prince Harry after winning the cup” eight days earlier, said the statement.