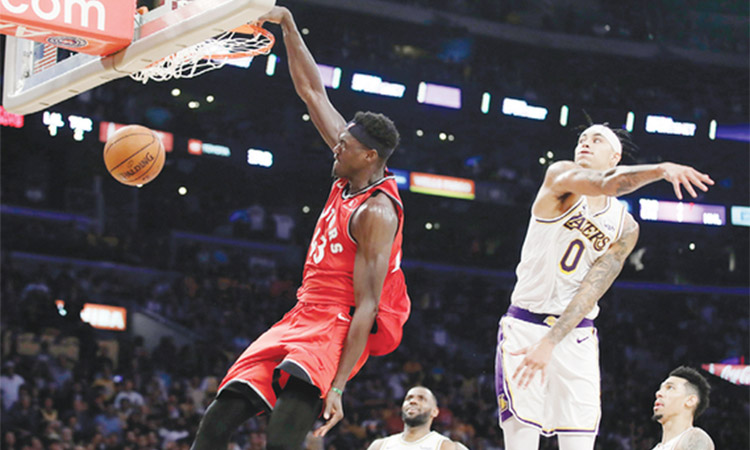 Siakam fuelled a late rally by the injury-depleted Raptors who trailed 60-52 at the half but dominated down the stretch against the host Lakers, who had a seven game win streak snapped.

Siakam is helping Raptor fans forget about the loss of NBA finals MVP Kawhi Leonard to the Los Angeles Clippers. The Raptors have been one of the best teams in the league despite losing Leonard to free agency and Danny Green to the Lakers.

The Raptors visit the Clippers on Monday for the first time since Leonard skipped town to play in Los Angeles.

The Raptors were missing two of their top players Sunday, including guard Kyle Lowry, who is out with a broken thumb and forward Serge Ibaka who has a severe right ankle sprain.

Chris Boucher scored 15 points, Norman Powell added 14 and Terence Davis chipped in 13 points for the Raptors, who have won six of their last seven contests.

“We got a lot of tough guys,” said Raptors Fred VanVleet who finished with 23 points. “Our guys got a lot of heart and those guys playing tonight because of injuries, they got something to prove.”

James finished with just 13 points but added 15 assists and 13 rebounds for his fourth triple double of the season as the Lakers suffered their first loss since a season opening setback to the Clippers.

Anthony Davis appeared to hurt his shoulder but stayed in the game. Lakers coach Frank Vogel said after the game Davis is “fine with that shoulder.”

Jokic drained a 15-foot fadeaway jump shot with three seconds left in overtime for the Nuggets, who won their fourth straight game.

Jokic finished with 20 points, Millsap had 14 points and 10 rebounds and Will Barton scored six of his 13 points in overtime. Barton also had 12 rebounds.