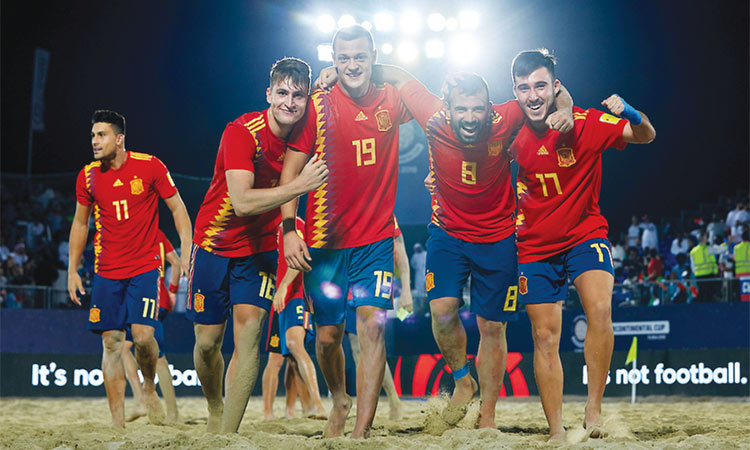 A classic European battle kicked off in the semi-finals, as last year’s finalists took on La Roja.

Llorenç Gomes, enjoying his final day of being the world’s best player ahead of the Beach Soccer Stars on Saturday, reminded everyone why he won the award the previous year when he smashed in a beautiful overhead from the half-way line, which bounced in off the Russian post.

This moment of brilliance was all that stood between these rivals as the second period began, and midway through the second stage, David beat the defender to a loose ball to double the lead.

It took Nikonorov just moments to cancel the goal out though, as he put away a close-range one-on-one to score his third of the tournament.

A ridiculously sweet strike from Chiky retook the lead for Alonso’s men and a lucky bounce off the sand saw Javi Torres double the lead. From that point on it was all about controlling the run of play, which they did well to run down the clock and clinch a place in the final.

At least a second-place finish is a huge improvement on their debut appearance in 2018 for La Roja, where they finished sixth. Russia will play in the play-off for third.

In another gripping semi-final, defending champions Iran were pushed all the way by hosts UAE. With the match ending 1-1 in regulation time, it was a pulsating tie-breaker that finally broke the deadlock, with the Iranians claiming their place in the final 4-3 and with a shot to defend their title.

The Pharaohs made a fifth-place play-off against Japan, edging a close match against the Azzurri.

A fifth-place finish was the best the Egypt or Italy couldn’t hope for in their 2019 Intercontinental Cup campaigns, but it took a long time for either side to break through the defensive lines. The first period ended in a goalless stalemate after the frame of the goal and both keepers kept out the opposing attackers.

Taha eventually broken the deadlock in the second period from close range, but moments later Josep Jr burst into the Egyptian box to power in an equalizer. Elshahat and Mohamad restored and then doubled the lead for the North Africans with fierce strikes in the space of a minute.

Italy ramped up their attacks as the minutes ticked away, and when it was down to the final seconds, Palmacci glided into the area to poke home the Azzurri’s third, taking the score to 4-3.

Eventually, they ran out of time and as a result, Italy will face Mexico in the play-off for seventh-place. Egypt, meanwhile, will lay Japan for fifth.

Earlier, the Samurai came back from being four goals down to beat Mexico.

Japan had been a whisker away from a place in the semi-finals in their final group game against UAE, but on Friday they found themselves in a scrap for finishing positions against a Mexico side who were yet to registered a win in Dubai.

El Tri were the first to score when Martinez found space in the box to give Mexico the lead going into the break. He completed a brace in the second period, as did Maldonado to push their advantage to four goals!

However, two blistering hits from Ozu saw the big Japanese defender cut the deficit in half before the teams returned to the sand for the final time.

The Samurai kept this incredible momentum up into the final period, as Matsuda and Oba rifled in goals to draw level. With two minutes on the clock, Matsuo completed the incredible comeback with a deflected shot, and Japan will play in tomorrow’s fifth-place play-off, guaranteeing their best ever finish in the Intercontinental Cup.