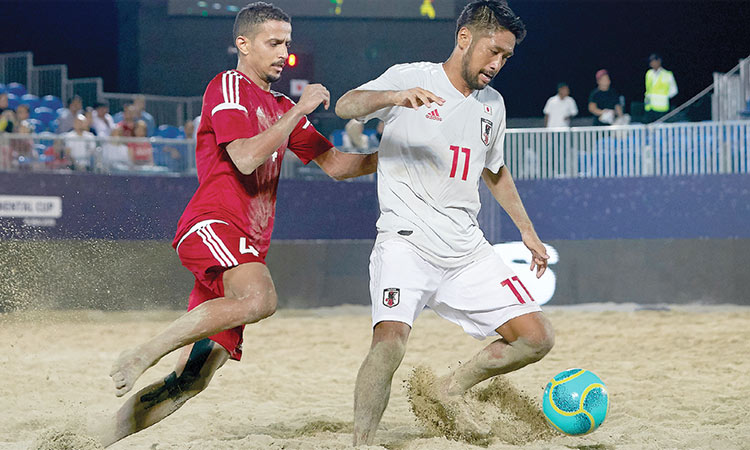 UAE and Japan players in action during their Intercontinental Beach Soccer Cup in Dubai on Thursday.

UAE were gifted a Japanese own goal in the final minute to force penalties and make the semi-finals.

It was the second time that these two sides had faced off this year, the last time being in the final of the AFC Championship where both teams qualified for the FIFA Beach Soccer World Cup. That too was a low-scoring match, which resulted in Japan lifting the trophy after penalties.

The stakes were high in the match here in Dubai too, so high in fact that neither team seemed willing to commit too many players in attack and controlling possession was the game plan for both.

Few shots flew and when they did they were under-par. Set-pieces in dangerous possessions were also wasted and the time ticked by with still no goal came through the first period, nor the second.

At the start of the third, however, Oba was impeded in attempting a bicycle kick and freekick just outside the box was awarded, which the number seven calmly converted, his third goal of the tournament.

They thought it was all over until disaster struck for Japan, when Matsuda looped the ball over his own keeper to find the Japanese net with just 12 seconds on the clock! Extra time saw no more goals, and the teams lined up for the inevitable penalty shootout, where the UAE netted two of their spotkicks to just one from Japan.

The stadium erupted at the scoring of the winning penalty, and in making the semi-finals, the Emirati guarantee their best finish in the competition since the 2013 edition.

With hopes of making the Intercontinental Cup semi-finals freshly dashed for these two sides, the battle for third in Group A commenced on the Dubai sand.

Despite the fast pace of the game, neither side managed to break the deadlock in the first period, and most of the shots flew disappointingly off target.

Hassane Mohamed eventually scored, but unluckily got the last touch on the ball as it went into his own net to give Mexico the lead. Teammate Elshahat was on hand to restore the balance with a brilliant strike from distance to see the teams go into the second break level too.

Mohamed Aly forced his way into space to smash in number two for the Pharaohs after the restart, and then a Samir freekick, which was deep in his own penalty box, slipped under keeper to push the lead to two.

After initially falling behind the Egyptians managed to well and truly turn the match around to take a comfortable 1-4 win thanks to a final-minute strike from Abdoo, and they will finish the group in third.

Earlier, a thrilling encounter between La Roja and the Azzurri saw the blues fall the right side of the 15 goal tie.

The stakes in this classic Mediterranean rivalry may have been unusually low, considering Spain were already qualified for the next round and Italy were already out of the Intercontinental Cup, but when these sides meet it is never dull… Edu Suarez stretched to deflect a wide shot and open the scoring, but it was soon cancelled out by a calm Gori penalty. The nominee for the best player of the year then scored another just minutes later, this time a cute bicycle kick.

Cintas equalised before the break but Frainetti floated into the box to volley Del Duca’s men ahead once more.

As the second period progressed, an avalanche of goals saw the score shoot to an incredible 6-7 going into the final period! In the chaos of goals, Edu and Adri Frutos bagged a brace each and Cintas polished off a hat-trick, while Gori did the same for the Italians, while Frainetti, keeper Carpita and Josep Jr got on the scoresheet too.

Spain had the thinnest of leads going into the final third, but Frainetti’s second of the match kept it close and then a blistering rocket from Ramacciotti put the Azzurri ahead for the last time, and Italy take three points on the final day of group games.

On Wednesday, Akbari starred as Iran came back against Egypt to send them out of their fifth edition of the Intercontinental Cup on Wednesday.

Samir gave the Egyptians an early lead to put them on the right track towards keeping themselves in the competition, but with a minute of the first period to play, Kiani slammed in the equalizer.

Meanwhile, Russia reach the next round with a tight win over Mexico on the second day in Dubai.

Russia have never not made the semi-finals in the Intercontinental Cup, and a win against Mexico on matchday two would see Likhachev’s side claim a spot with a game still to play.