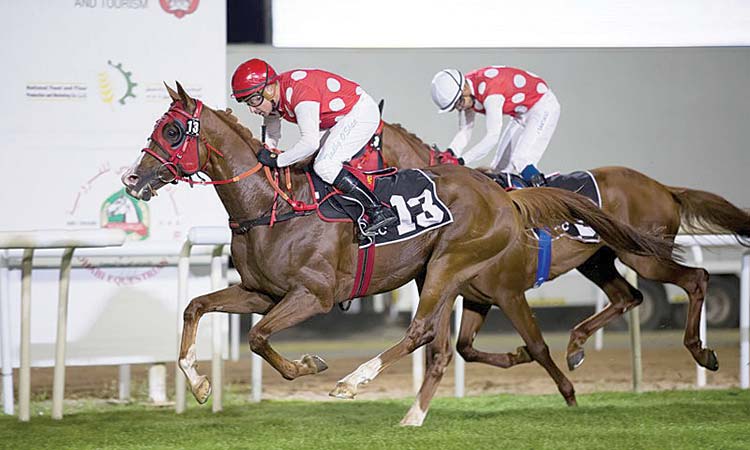 The final meeting of the six-race card will feature a strong filed of 14 Thoroughbreds.

The Thoroughbreds take centre stage at the Abu Dhabi Equestrian Club on Friday when their sole race, a 1600m rated conditions stakes and final of six races, has attracted the maximum allowed field of 14.

Leading the charge is Shamaal Nibras, winner of the equivalent race, considered by many a prep for the Sheikh Zultan Bin Sayed Al Nahyan National Day Cup over the same course and distance, in both 2016 and 2017.

Trained by Doug Watson for EERC (Emirates Entertainment Racing Club), the 10-year-old First Samurai gelding has been a real flag-bearer for the syndicate, his six victories for them including the 2018 Group 3 Jebel Ali Mile, and was victorious on his most recent outing in the valuable 1400m Jebel Ali Classic (Silver Jubilee), a race he also landed in 2017.

The mount of Pat Dobbs, he was third in the equivalent contest 12 months ago and Watson is very happy with his veteran.

“He has been a great servant over the years and is in great form,” Watson said.

“He is a pleasure to train as he loves his work and racing. Hopefully he can go close.”

EERC spokesman Justin Byrne added: “He has been a real star for the syndicate and we decided against retiring him because he is a happy horse who loves his racing. He will tell us when he has had enough, but hopefully he has another good season in him.”

Watson also saddles Eshtiraak, a new recruit to the yard having raced four times at the 2019 Dubai World Cup Carnival for David Hayes.

The 5-year-old Street Cry gelding remains in the ownership of Sheikh Hamdan Bin Rashid Al Maktoum, Minister of Finance, and Watson said: “He is a nice new horse in the yard, has settled in well and is training nicely, so we are hoping for a good run.”

Sheikh Hamdan is actually responsible for five of the 14 runners, as well as two reserves with retained jockey Dane O’Neill opting to ride Eqtiraan for Ali Rashid Al Rayhi who saddled the owner’s Jaaref to win this last year.

“Mukalal has had more than a year off having arrived late last season,” Charpy said.

“We have high hopes for him looking ahead and we like him.

“Pinter seemed to find 6 furlongs too short at Jebel Ali last week, so we are trying him back on turf and hopefully with that run under his belt, he can go well.”

In what appears a very competitive heat, Connor Beasley has sided with Above N Beyond for Ahmad BinHarmash, leaving Adrie de Vries what appears a nice spare ride on stablemate Poet’s Society.

From a trio of Salem Bin Ghadayer combatants, Royston Ffrench has elected to ride Mailshot, a course and distance handicap winner a month ago with Antonio Fresu choosing Billingsgate over Sheikh Hamdan’s Azmaam for Musabbeh Al Mheiri.

Ismail Mohammed both owns and trains Wasim, a 4-year-old Acclamation colt who was runner-up in the 1400m Listed The President Cup on his only previous outing in the capital. His name is just another to add to the mix in a race likely to produce plenty of clues for not only the Abu Dhabi feature races, but also turf contests at Meydan’s 2020 Dubai World Cup Carnival.

Of the five Purebred Arabian contests, the 1600m handicap is the most valuable and looks wide open with O’Shea combining with his main employer, Khalid Khalifa Al Nabooda, to partner AF Al Aassi, one of six in the race due to be saddled for the owner by Ernst Oertel.

From three trained by Jean de Roualle, Richard Mullen has opted to ride Brraq in the colours of Sheikh Mansour Bin Zayed Al Nahyan with Fabrice Veron and Ebhaar, representing the Al Asayl team of His Highness Sheikh Khalifa Bin Zayed Al Nahyan, another representing powerful connections who merits consideration in such a competitive affair.