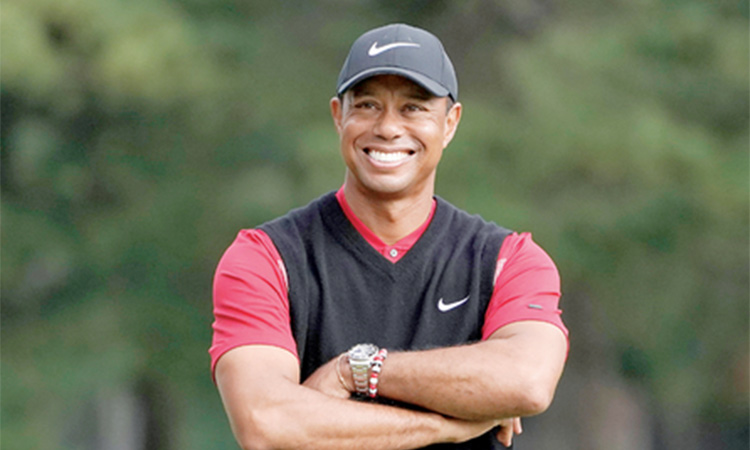 Team US captain Tiger Woods is expected to pick himself when he unveils his four wildcards for the Presidents Cup on Friday. File / Agence France-Presse

Ernie Els opted on Thursday for the experience of Jason Day and Adam Hadwin alongside rookies Im Sung-jae and Joaquin Niemann as he made his Internationals Team Presidents Cup captain’s picks to face Tiger Woods’s Team USA next month.

The Internationals will tee off at Australia’s Royal Melbourne from Dec. 12-15 against a star-studded US captained by Woods, who is expected to pick himself when he unveils his four wildcards on Friday.

“It was very difficult for me, but I needed guys in solid form,” said Els, speaking from Beijing.

“That’s why I went for these four guys who are very consistent and strong under pressure.

“I’m really excited by the new blood that’s come in and we have experience too. I think it balances things really well,” added the four-time major winner.

Australia’s former world number one Day will feature in his fifth Presidents Cup despite having seen his ranking slip to 29th, while world number 44 Hadwin will make his second appearance after his debut in 2017.

South Korea’s exciting 2019 PGA Tour Rookie of the Year Im and Chile’s Niemann have been in spectacular form. Both will make their Presidents Cup debuts.

Im, 21, tied for third with Rory McIlroy two weeks ago at the Zozo Championship in Japan, won by Woods, and the world number 34 followed up with tied 11th at the WGC-HSBC Champions in Shanghai on Sunday.

“Even as a child, it has always been a dream of mine to make the Presidents Cup,” Im said.

“I’m so happy to be chosen as a captain’s pick. I would really like to beat the United States team.”

Niemann, ranked 54, became the first player from Chile to win on the PGA Tour when he triumphed at the Greenbrier in September and the 21-year-old followed up with tied 12th in a high-quality field at the CJ Cup in South Korea last month.

Im is keen to partner fellow rookie Niemann. “I’ve played with Joaquin a lot in tournaments and we have a similar style of play,” said the Korean. “He’s very accurate and I feel like the way we execute our short game is similar.”

Day’s selection makes it four Australians in the 12-player team as he joins the already-qualified Cameron Smith, making his first appearance, plus seasoned compatriots Marc Leishman and Adam Scott.