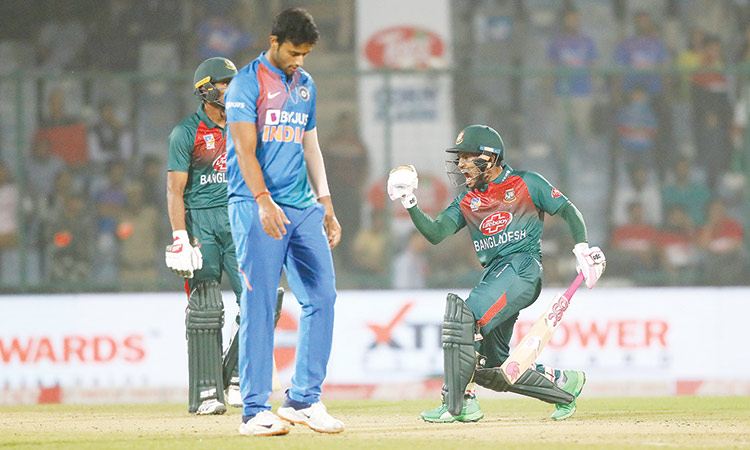 Wicketkeeper-batsman Mushfiqur Rahim scored a brilliant half-century as Bangladesh registered their first ever T20I victory over India here on Sunday.

In what was the 1000th T20 international, Bangladesh came out with an all-round performance as they defeated India by seven wickets at the Arun Jaitley Stadium to take 1-0 lead in the three-match series.

Pollution levels turned hazardous during the past week, putting the match in danger of being called off, but India’s cricket board felt it was too late to change the venue.

In December 2017, two players from Sri Lanka fell ill on the pitch because of smog and play in the Test match was briefly suspended.

Needing 149 to break the streak of eight straight losses against India, Bangladesh rode on an unbeaten 60 (43 balls, 4x8, 6x1) by Mushfiqur to chase down the target with three balls to spare.

The match looked evenly poised when Bangladesh needed 22 runs off the last two overs. However, Mushfiqur collected 18 runs off the 19th over bowled by Khaleel Ahmed and tilted the game in the visitor’s favour. Skipper Mahmudullah then finished things off in style, hitting debutant Shivam Dube for a six over long-on in the third ball of the final over to script a historic victory.

Earlier, put into bat, India got off to a poor start as they lost stand-in skipper Rohit Sharma in the opening over. Rohit (9), who on Sunday went past Virat Kohli to become the leading run-scorer in T20Is, couldn’t take his Test form into the shortest format as Shafiul Islam trapped in front of the stumps in the fifth delivery of the match.

Lokesh Rahul then joined Shikhar Dhawan in the middle and the duo made sure the hosts didn’t lose any more wicket in the Powerplay. Both adopted a cautious approach and played the balls on their merit, hitting boundaries whenever they got the opportunity. The two took India’s score to 35/1 at the end of six overs before Rahul (15 off 17 balls) lost his wicket to leg-spinner Aminul Islam.

Shreyas Iyer (22 off 13 balls) looked good during his brief stay and smashed two sixes and a four before losing his wicket to Aminul while trying to go for his third maximum.

Dhawan then threw away his wicket just when he was looking to up the ante. After scoring 41 off 42 balls, the left-handed opener got run out following a miscommunication with Rishabh Pant. Shivam Dube failed to impress on his maiden international outing as he could score just one run before he was caught brilliantly by Afif Hossain off his own bowling. Pant then stitched an 18-run partnership with Krunal Pandya before getting out after contributing 27 runs to India’s tally.

However, Pandya (15 off 8) and Washington Sundar (14 off 5) provided India the much-needed impetus as they collected 16 runs in the final over to help their team get close to the 150-run mark.

Bangladesh also began their run chase poorly as they lost opener Liton Das in the very first over. However, Naim Sheikh and new batsman Soumya Sarkar then launched a counter-attack to put the opposition under pressure. Both played freely and by the end of the seventh over, they took Bangladesh to 53/1, looking set to take the game away from the hosts.

However, leg-spinner Yuzvendra Chahal then had Naim caught by Dhawan at long-on, providing some much-needed respite to the Indian crowd.

At the end of the 10th over, Bangladesh were 62/2 with Sarkar and Mushfiqur Rahim at the crease. The experienced duo batted sensibly and made sure that there was no loss of wicket till the 15th over. They took the total to 99/5, with Bangladesh needing 50 runs off the final five overs.

Sarkar and Mushfiqur stitched a 60-run partnership and kept the visitors on course for a first ever T20I victory over India before the former was castled by Khaleel Ahmed for a well-made 39 with Bangladesh still needing 35 runs off 18 balls.

However, Mushfiqur didn’t let his team down and used all his experience and stayed there right till the end with skipper Mahmudullah (15*) to take their team across the line. The two were involved in an unbeaten 40-run stand.

The second match of the series will be played in Rajkot on Nov.7. 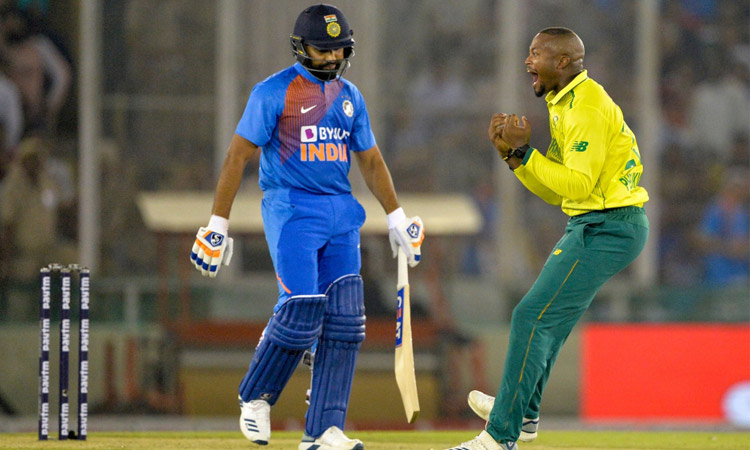 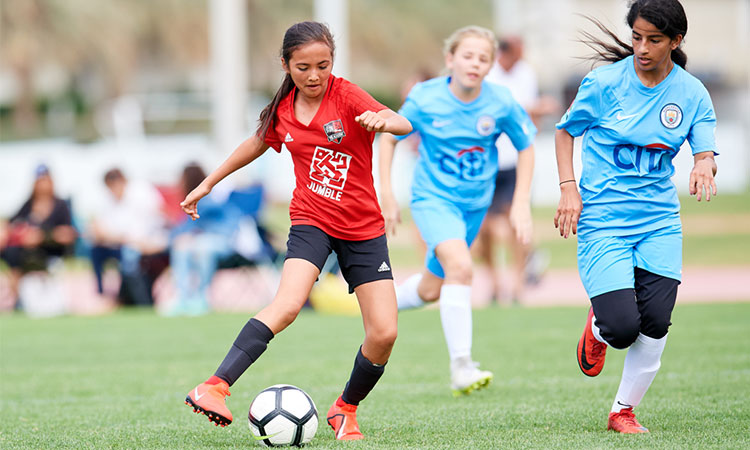