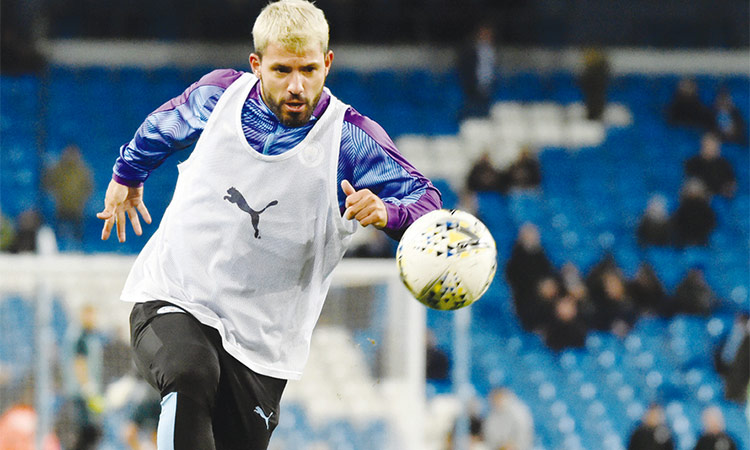 Sergio Aguero holds the key to Manchester City’s bid to overhaul Premier League leaders Liverpool as the Argentine striker reaps the rewards of the “best decision of his life”.

When Aguero walks onto the Etihad Stadium pitch ahead of Saturday’s clash with Southampton, he will feel more at one with his surroundings than he would ever have imagined when he arrived eight years ago.

Back then, Aguero was a talented but not yet fully rounded player hoping to thrive in England after a promising start to his European career with Atletico Madrid.

The intervening years have been a dream come true for Aguero, who is now City’s record goal-scorer and has amassed four Premier League titles, one FA Cup and four League Cups while helping the club’s become top dogs in Manchester after decades of dominance from United.

Aguero marked his 350th appearance with two goals against Southampton in the League Cup fourth round win on Tuesday, giving him 12 for the season and 243 in his City career.

For all the brilliance of his City team-mates Raheem Sterling and Kevin De Bruyne, it is the 31-year-old Aguero and the guarantee of goals which remains the key element in their bid for a third successive English title.

“It was hard to imagine spending so long with one club when I first started off but as time went by, it became clearer to me that it was exactly what I wanted. And here I am, enjoying my eighth season with Manchester City,” Aguero said.

“How couldn’t I feel like a Mancunian? I feel at home in this club and in this city. As soon as I arrived, I’ve felt like I belonged, that made the adaptation process much more natural.

“I believe coming to Manchester City is one of the best decisions I’ve taken in my life.”

Chasing their first top-flight title since 1990, Liverpool are six points clear of City and remain a daunting obstacle for Aguero and company.

Jurgen Klopp’s side head to Aston Villa with nine wins from their 10 league games this season, a blistering streak that is fuelled by the intense competition for places and the high standards set by the European champions.

Evidence of that desire was provided by Alex Oxlade-Chamberlain, who scored a superb goal in the midweek League Cup win over Arsenal but then admitted he hadn’t done enough to deserve to retain his place against Villa.

“I wasn’t great on the ball and not near my own personal level of where I want to be. I watch the boys of a weekend and I know what it is about here,” he said.

“You have got to be at a really high physical level to go and put in a performance like that. Fab (Fabinho) did really well at the weekend so I need to keep pushing myself and maybe I will get a chance.”

Elsewhere, Manchester United, enjoying a mini-revival after their poor start, can make it four successive away wins when they visit Bournemouth.

Ole Gunnar Solskjaer’s side beat Chelsea in the League Cup on Wednesday thanks to Marcus Rashford’s superb free-kick and the United striker feels confidence is growing in the squad.

“If you get a couple of wins back-to-back early on in the season it can change the direction the season is going,” Rashford said.

Arsenal boss Unai Emery is under pressure to deliver a win against Wolves after his side blew leads against Liverpool and Crystal Palace.

The Palace match was marred by Granit Xhaka’s astonishing feud with Gunners fans and the fall-out continues, with Emery still deciding whether to strip him of the captaincy.