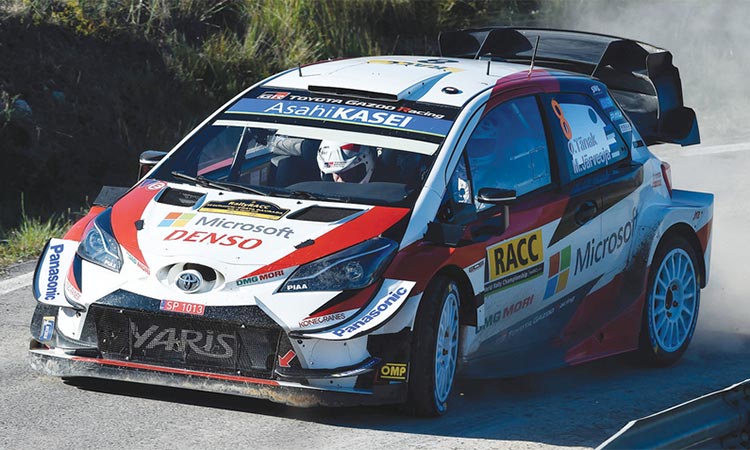 Ott Tanak sealed his first World Rally title when he finished second to Thierry Neuville in the rally of Catalonia on Sunday. With one race to come in Australia, from Nov. 14 to 17, and a maximum of 30 points to be won, Tanak can no longer be caught in the driver standings.

Tanak was ecstatic about breaking 15 years of French domination.

“Feels good,” said the Estonian after winning the final power stage. “It’s difficult to say the pressure I felt this weekend - it was next level.”

Tanak’s second place on Sunday and his victory in the final power stage put him 36 points ahead of Belgian Thierry Neuville.

“To manage all this and get through it has been the target of my life,” Tanak said.

“When you are on the verge of this you cannot imagine it.”

Tanek is the first non-Frenchman to win the title since Norwegian Petter Solberg in 2003. Sebastien Loeb won it nine years straight with Sebastien Ogier winning the last six.

The battle for second and third in the championship, will continue in Australia.

Neuville, who drives a Hyundai, jumped to second in the standings, ahead of six-time defending champion Ogier who is in his first season back at Citroen.

“We did what we could this weekend,” Neuville said.

Neuville’s victory and the third place of Spanish team-mate Dani Sordo increased Hyundai’s lead over Toyota in the manufacturers’ ranking from eight to 18 points.

At 45, former champion Loeb finished fourth in a Hyundai in his fifth drive of the season.

The Spaniard, second overnight behind his colleague, started 3.1sec clear of third-placed Tanak. He is desperate to hold the Estonian at bay to keep Neuville’s title hopes alive and enhance Hyundai’s manufacturers’ championship lead over Tanak’s Toyota team.

He extended the advantage by 0.4sec after going second fastest in Riudecanyes in his i20 World Rally Car.

He added another second by winning the following La Mussara test to return to the mid-leg service with a 4.5sec margin over Tanak’s Yaris.

“It’s not a lot but it’s better than nothing,” said Sordo. “I tried to push but Ott wants to take second place. I lost a little bit of time in some dirty places and it’s very fast. It’s not such a big gap but we’re still here.”

Tanak was trying to strike a balance between outright pace and not taking risks. “We need to finish the rally. When it gets fast we are on all new notes so there is not so much confidence to carry the speed,” he said.

Neuville won Riudecanyes but was only sixth in La Mussara, returning to service with a comfortable 17.5sec lead over Sordo.

“I tried to be very efficient but at some point I had so many pace note corrections that I got slightly confused and had to find the concentration and calm down. I was struggling with the brakes as well, so I didn’t take any risks,” explained the Belgian.

Tanak may have youthful features, but he is a late developer.

When the Estonian clinched the World Rally Championships, he broke the rule of the Sebastiens, after Frenchmen Loeb and then Ogier had won the previous 15 titles.

Even though the Estonian’s promise was recognised early, he was 29 when he gained his first WRC victory in Sardinia late in 2017.

After that he accelerated, perhaps because fatherhood made him more careful.

“It is said that drivers become slower when they have children,” his wife Janika said in “Tanak, the movie”, a documentary released this year about the man she married in 2016.

“In Ott’s case, the speed is still there. He says he’s stopped taking unnecessary risks. Maybe it helped him to progress.”

The 32-year-old, who has two young children, clinched this year’s title by winning six of the first 13 rallies, compared to three each for his main rivals, Sebastien Ogier and Thierry Neuville.

This season is his second for Toyota under the guidance of Finn Tommi Makinen, the world champion from 1996 to 1999.

Tanak says he also “learned a lot” racing with Ogier at M-Sport Ford before joining Toyota.

The native of Karla in Estonia inherited his passion from his father Ivar, a competitive rally driver. The two built Ott’s first rally cars together.

Tanak received early help from Markko Martin, the only other Estonian to have won in the WRC, taking five rallies in 2003 and 2004.