PNG beat Singapore by 43 runs to qualify for playoffs - GulfToday

PNG beat Singapore by 43 runs to qualify for playoffs 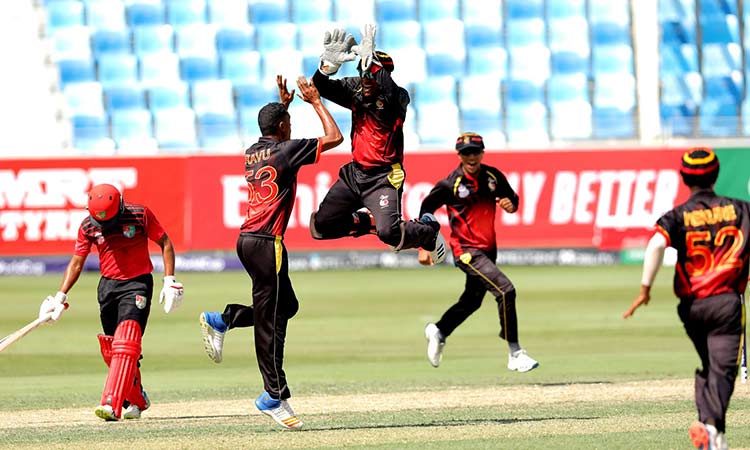 PNG’s Damien Ravu celebrates with his team-mates after taking the wicket of Singapore’s Rezza Gaznavi.

DUBAI: Papua New Guinea (PNG) defeated Singapore by 43 runs to become the first team to qualify for the playoffs.

With this win, PGN get eight points from five games to take top spot of Group A of the ICC men’s T20 World Cup qualifiers.

Singapore won the toss and asked PNG to bat first. They made a perfect start as openers Tony Ura and Assad Vala shared an 61-stand.

Vala was removed by Tim David. He scored 24 off 18 balls. Later, Ura also returned to the dressing after hitting an 18-ball 24.

Next batsman in Sese Bau denied Param the chance of completing a hat-trick. Bau fell for 11 as PNG looked a bit shaky at 101 for 4.

Coming with an objective to revive the innings, Charles Amini and Kiplin Doriga stepped up and smashed unbeaten 40’s to take PNG to a sizeable total of 180/4 in 20 overs.

Amini scored 41 not out off 28 balls while Doriga’s unbeaten 43 came off 27 balls. The duo added an unbroken 79 runs for the fifth wicket.

In reply, Singapore suffered the first jolt when

Surendran Chandramohan was dismissed off the first ball of the innings.

He got run out without facing a ball. Rohan Rangarajan scored 27 off 26 balls and lost the wicket while tying to accelerate the run rate.

The next in batsman Rezza Gaznavi was dismissed off the very next ball by Damien Ravu, which left Singapore on 37 for 3.

Tim David was the only Singapore batsman who offered any resistance, hitting a 44 off 26 balls. He failed to get much support from other batsmen as Singapore could only manage 137 for the loss nine wickets in their 20 overs.

In another match, Ireland kept their hopes alive after their thumping eight wickets win over Jersey at the Tolerance Oval Ground in Abu Dhabi.

Ireland bowled out Jersey for 105 and later chased down the target with 36 balls to spare. Paul Stirling (58) did the bulk of scoring for Ireland.

Meanwhile, Namibia beat Kenya by 87 runs at the Dubai Stadium. Batting first, Namibia posted 181 for the loss of five wickets. In reply, Kenya were all out for 94 in 18,5 overs.