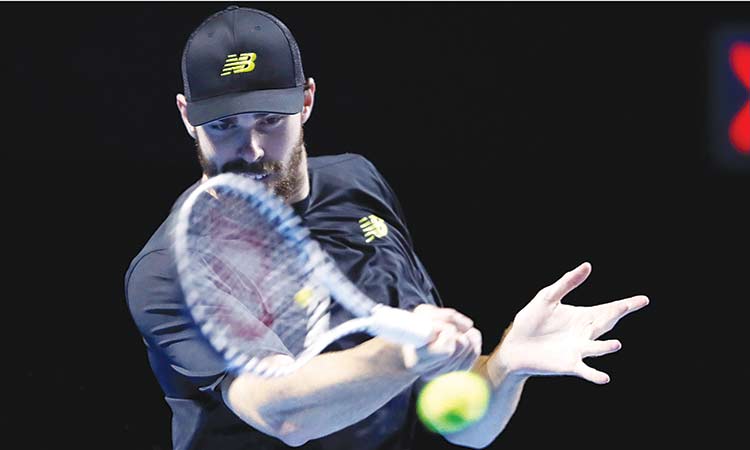 Reilly Opelka plays a shot against Roberto Bautista Agut (unseen) during their quarter-final match of the Swiss Indoors in Basel on Friday. Reuters

Reilly Opelka fired 31 aces to reach the fifth semi-final of his career on Friday as he beat Roberto Bautista Agut 6-3, 3-6, 6-3 at the Swiss Indoors.

The 37th-ranked American’s victory in 93 minutes also slowed the progress of his Spanish opponent in the chase for one of the two remaining places at the ATP Finals in London next month.

Opelka has reached four of his five semi-finals this season —  most recently at the start of the month in Tokyo —  as the 22-year-old works to broaden his game beyond just a huge serve.

The 6ft 11in (2.11m) giant earned the only title of his career last February at Long Island, New York.

Opelka ended his afternoon when he set up two match points with an ace and then caught Bautista Agut wrong-footed with a winner into the empty court on his first chance.

Bautista Agut, the ninth-placed player in the ATP Race To London, was trying to keep pace with eighth-placed Matteo Berrettini, with both men hoping to earn a spot at the Nitto ATP Finals from Nov. 10-17. But since Berrettini reached the semi-finals in Vienna on Friday and Bautista Agut crashed out in Basel, the Italian’s lead for the final spot grows to 130 points, and that lead can increase depending on Berrettini’s performance the rest of the week in Basel.

Earlier, Stan Wawrinka was forced to withdraw from Friday’s Basel quarter-final showdown against best friend Roger Federer with a back injury, just an hour after struggling past America’s Frances Tiafoe in a gruelling second round clash.

Top seed Federer, chasing a 10th title at his hometown event, will receive a walkover into Saturday’s semi-finals. It would have been the 27th meeting between the two Swiss team-mates and Federer would have been the comfortable favourite boasting a 23-3 record over their 14-year rivalry.

Wawrinka stands in provisional 14th place in the points race to the year-end ATP Finals and his chances of qualifying now look slim with just next week’s Paris Masters to play on the regular schedule.

The struggle against Tiafoe, which lasted for two and a half hours and was decided by an 11-minute concluding game, had put Wawrinka into his fifth quarter-final at the Swiss tournament.

Wawrinka hammered 14 aces — his last two in the penultimate game.

Tiafoe saved a Wawrinka match point with an ace of his own in the final game before the home favourite got the crowd on its feet with a backhand winner down the line to seal the success.

Both players hugged at the net, with Tiafoe receiving a standing ovation from the 9,000-strong crowd.

Fourth seed Aryna Sabalenka beat doubles partner and Belgian sixth seed Elise Mertens 6-4, 3-6, 7-5 to top their group and qualify for the semi-finals of the WTA Elite Trophy in Zhuhai, China on Friday.

Despite making 10 double faults in the match, Belarusian Sabalenka — who has won three of her four singles titles in China — advanced after a physically taxing battle in two hours and 20 minutes.

Sabalenka will play the Czech Republic’s Karolina Muchova, who fought long and hard for a second consecutive day and eventually came out on top with a 6-4 4-6 6-3 win over second seed Sofia Kenin to book her spot in the semis. China’s 12th seed Zheng Saisai lost 6-4 6-3 to Croatian fifth seed Petra Martic in their final round robin match but the local favourite still qualified for the semis.

Elsewhere, World number one Ash Barty and Japan’s Naomi Osaka were drawn in the same group for the round robin matches of the WTA Finals to be held in Shenzhen, China next week, with the year’s four Grand Slam champions split evenly between the two groups.

Barty and Osaka were joined by the Czech Republic’s Petra Kvitova and Switzerland’s Belinda Bencic in the Red Group. Simona Halep and Bianca Andreescu were drawn in the Purple Group with Czech Karolina Pliskova and Ukrainian Elina Svitolina.

The tournament, which runs from Oct. 27 to Nov. 3, is being held in Shenzhen for the first time and a total of $14 million in prize money is up for grabs.