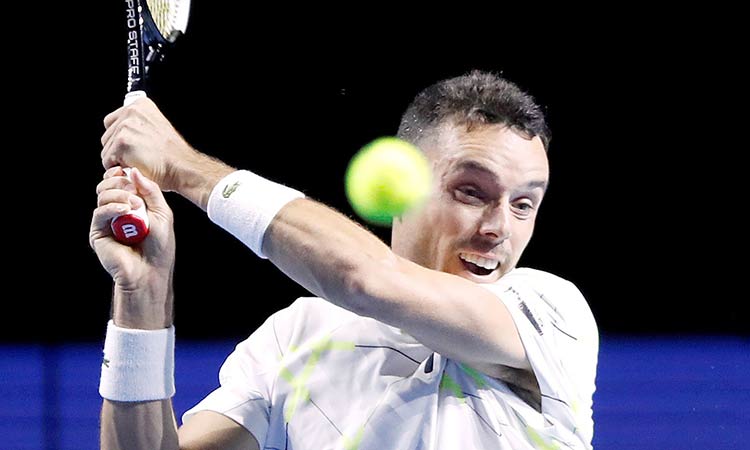 Roberto Bautista Agut in action against Richard Gasquet (unseen) during their second round match of the Swiss Indoors in Basel on Thursday. Reuters

Greece’s Stefanos Tsitsipas came from behind and a set down to beat Ricardas Berankis 6-7 (4/7), 6-2, 6-4 to move into the quarter-finals of the Swiss Indoors in Basel on Thursday.

Roberto Bautista Agut of Spain also kept alive his hopes of qualifying for the Nitto ATP Finals, but fellow London contender David Goffin fell in the second round.

Earlier, Roger Federer crushed Radu Albot 6-0, 6-3 on Wednesday to win his 22nd match in a row at the tournament and earn a quarter-final place at his home event for the 17th time.

Bautista Agut, who is attempting to join Tsitsipas and Daniil Medvedev as first-time qualifiers at the season finale, to be held at The O2 in London from Nov. 10-17, beat Richard Gasquet of France 6-2, 4-6, 6-3 over one hour and 44 minutes.

In recording his 40th match win of the season, the Spaniard not only advanced to his 13th tour-level quarter-final, but also added 45 points to further strengthen his position of ninth in the ATP Race To London tally (2,530 points).

Earlier in the day, Goffin, runner-up at the 2017 Nitto ATP Finals and 11th in the Race (2,325 points), could not find a way to break the serve of American Reilly Opelka and paid the price.

Bautista Agut is just 40 points away from eighth-placed Italian Matteo Berrettini (2,570 points), with two singles berths left up for grabs at the Nitto ATP Finals.

The nine-time champion Federer, was ruthless in a 22-minute opening set, finishing the entire job in 63 minutes in front of 9,000 fans.

Federer, who is playing in Basel for the 19th time, won his first set to love at the tournament since 2006.

His loss of just three games on Wednesday was his most powerful showing on the ATP since beating Andreas Seppi at the Paris Masters 6-1, 6-1 four years ago.

Federer dominated 49th-ranked Albot, sweeping the first eight games before the Moldovan got on the scoreboard.

The top seed finished on a first match point after five aces and five service breaks.

Meanwhile, Novak Djokovic hailed the appointment of Andrea Gaudenzi as the new chairman of the ATP on Thursday in succession to Chris Kermode whose controversial exit led to a rift between the world number one and fellow heavyweights, Federer and Nadal.

Gaudenzi, 46, who reached 18 in the world rankings in his playing career and won three titles before retiring in 2003, has penned a four-year deal.

“On behalf of the players, I’d like to welcome Andrea as the next chairman of the ATP,” said Djokovic.

“As a former player, he has walked in our shoes, and has also become a successful entrepreneur following his playing career. He has all the qualities to lead the Tour and we look forward to working together for the benefit of the players and the sport more generally.”

Kermode had been in charge since 2014 but the player representatives decided at Indian Wells in March not to renew his contract.

The 54-year-old Briton was pushed towards the exit by representatives who, at the time, included the American Justin Gimelstob, a close associate of Djokovic.