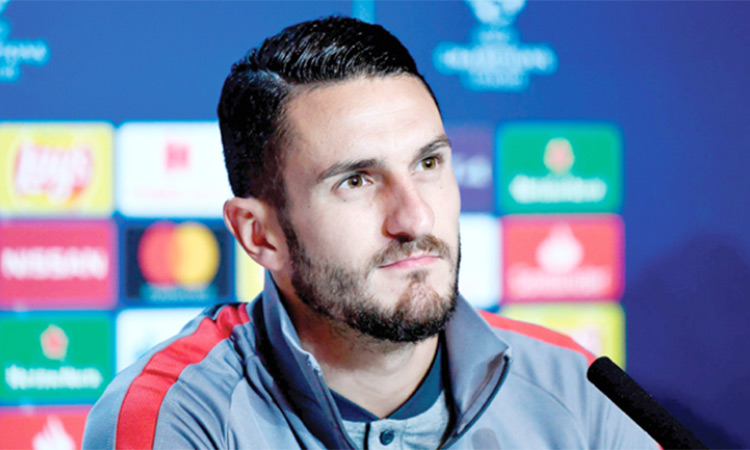 Atletico captain Koke is one among those who has borne the brunt of supporters’ angst after three consecutive draws. File / Reuters

Atletico were touted as title contenders after a revamp that saw them bring in more than 300 million euros worth of talent during the close season, including record signing Joao Felix.

Renan Lodi, Kieran Trippier, Mario Hermoso, Marcos Llorente and others arrived at the Wanda Metropolitano and a 7-3 humiliation of bitter rivals Real Madrid in a pre-season friendly promised much.

However, despite a solid start, Atletico lost steam and by the time they faced Real again in September, they could only share a frustrating 0-0 draw.

That was followed by another goalless tie at Real Valladolid and then a 1-1 home draw with Valencia last weekend, which left fans frustrated.

Atletico captain Koke has been one of those who has bore the brunt of supporters angst.

The midfielder was whistled off by some in the 1-0 home win over Bayer Leverkusen in the Champions League on Tuesday.

His replacement Alvaro Morata scored a late winner to help Atletico triumph but it was another worrying evening for the Rojiblancos, who looked blunt without injured forward Felix.

“People have their opinions and you have to respect that,” said Koke.

“I just want to keep working, to help the team to move forward. I respect what people think of me. We all work to get results and they’ll come soon.”

Koke said at the start of the campaign that he had never been more excited about a season beginning but it has proven difficult for him and Atletico so far.

Coach Simeone said dealing with criticism was part of the game and he is hoping the team can soon win over wavering fans.

“It’s football,” said Simeone. “When Koke leaves they will thank him for what he’s done for Atletico.

“People are spontaneous, we have to try and turn the whistles into applause.”