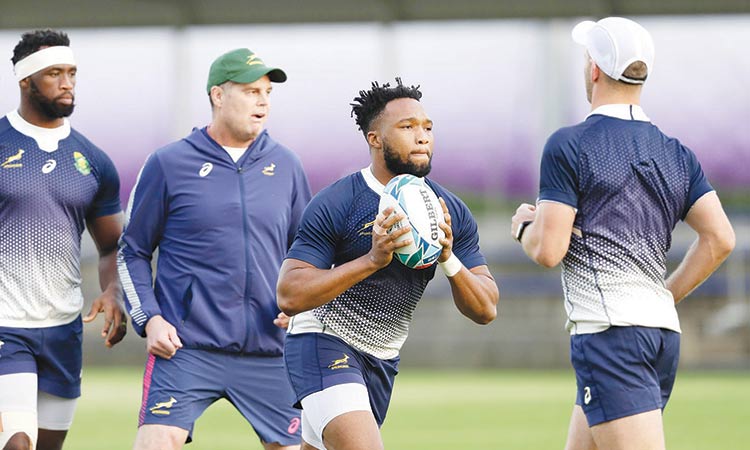 South African players attend a training session ahead of their World Cup semi-final clash against Wales on Wednesday. Reuters

Party-poopers South Africa will need to be at their very best to overturn recent history against Wales in this weekend’s World Cup semi-final, scrum-half Faf de Klerk warned on Wednesday.

Warren Gatland’s side represent a clear and present danger to South Africa’s title hopes, the Welsh having beaten the two-time world champions in five of their previous six meetings following years of Springboks dominance.

To avoid slipping on a potential banana skin, de Klerk promised the Boks would come out firing in Yokohama on Sunday after ending the fairytale run of hosts Japan with a 26-3 mauling of the tournament darlings last weekend.

“It’s definitely going to be a slippery one,” said the pint-sized scrum-half with the flowing blonde locks.

“But as a team we’re more in tune with how they want to play. Whoever you play in a World Cup semi-final, they’re going to pose threats -- not just Wales. Any team could be a bogey team on the day. We’re just going to have to be up for it.”

De Klerk added: “It’s going to be a massive battle in the air. It’s going to come down to three or four moments.”

South Africa, who have failed to reach the World Cup final since lifting the Webb Ellis Cup in 2007, finished behind defending champions New Zealand in Pool B after losing 23-13 to the All Blacks in their opening game.

But assistant coach Mzwandile Stick insisted the Springboks were coming to the boil nicely after that early wake-up call.

“We were guilty in that New Zealand game of not converting our opportunities into points,” he said, promising a more clinical performance against Wales, who edged 14-man France 20-19 in their quarter-final.

“Wales are a territory-driven team and always suffocate teams -- they don’t allow them to come into their half. It’s going to be key for us that when we get our opportunities, we convert them.

“If you look at (Gareth) Davies at nine and guys like (Liam) Williams and (Dan) Biggar -- these are guys who’ve been around. They’ve got a lot of experience.”

But Stick tipped explosive wingers Makazole Mapimpi, who has bagged 13 tries in 12 Tests, including two against Japan, and Cheslin Kolbe (seven in 13) to terrorise the Welsh, noting: “Makazole has always been one of the best finishers in the game.” Kolbe, who has been playing on a sore ankle since South Africa’s third pool game against Italy two weeks ago, should be fit to play, added Stick.

With the winners set to face New Zealand or England in the final, Stick also weighed in on the “spy-gate” row that erupted when England coach Eddie Jones claimed team officials had spotted a hidden camera filming their training.

England assistant coach John Mitchell, a Kiwi and former New Zealand boss, suggested the secret sleuths had been sent by the All Blacks.

“I find it stupid to do it,” said Stick. “You’re not only fooling yourself, or cheating the people around you. You’re cheating to the world.

“I don’t think we will ever do something like that,” he added. “It’s not part of what we stand for as South Africans.”

Meanwhile, Wales are confident their crucial but injury-prone centre pairing of Jonathan Davies and Hadleigh Parkes will be fit for Sunday’s World Cup semi-final against South Africa.

Davies was a late withdrawal from the 20-19 quarter-final victory over France last weekend with a knee injury, while Kiwi-born Parkes played with a shoulder contusion and a bone fracture in his hand.

But Wales’ skills coach Neil Jenkins said Wednesday he had “no doubt” the midfield partners would be fit to take on the Springboks in Yokohama.

“As the week progresses, they’ll train with us as normal and obviously I’d like to think they’ll take a full part in training this week and make themselves available for selection on Sunday,” he added.

“These games don’t come around very often,” added Jenkins, whose 1,090 points in 87 Tests for Wales and four for the British and Irish Lions leave him third in the all-time highest scorers’ list behind ex-All Black Dan Carter and England’s Jonny Wilkinson.

“I think sometimes if your leg’s hanging off, you strap it to yourself to get yourself right and I’m sure they’ll do that this week!” In a sign Wales felt they needed cover in the back-line, they called up Cardiff Blues winger Owen Lane to replace Josh Navidi when the No 8 was ruled out of the rest of the tournament with a hamstring injury.