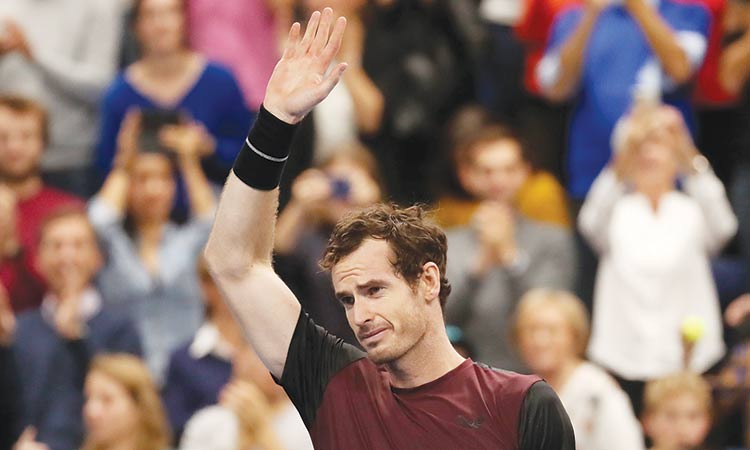 Andy Murray has been selected for Britain’s Davis Cup squad 24 hours after winning his first tournament since 2017.

Former world number one Murray clinched his first ATP Tour title for over two years on Sunday when he beat Stan Wawrinka in the European Open final in Antwerp.

It was only the sixth singles event the 32-year-old Scot has competed in since returning from the hip resurfacing operation he had in January.

The group will compete in the new-format Davis Cup in Madrid next month as Murray looks to emulate his star role in Britain’s 2015 victory in the competition.

“Dan is playing some of the best tennis of his career and firmly deserves his place back inside the world’s Top 50.

“It’s been absolutely fantastic to see Andy back competing again, headlined by his incredible win in Antwerp yesterday.

“Jamie and Neal have been gaining much momentum as a team with impressive semi-final runs at Cincinnati, US Open, Beijing and Shanghai.

“We are in a good positions with improved strength and depth in our team and will be naming the fifth player in the next couple of weeks.

“We are looking forward to bringing our best tennis to the group phase.”

The Davis Cup will have a round-robin stage before the group winners and the next two top teams advance to the knockout stages.

The tournament takes place on the hard courts of La Caja Magica in Madrid from Nov. 18-24.

The ties themselves will have two singles matches and one doubles, all of which will be best-of-three tie-break sets.

Great Britain are in Group E with Holland and Kazakhstan, who they face on Nov. 20 and 21 respectively.

Meanwhile, wayward tennis talent Nick Kyrgios may be a “different character” but Australia’s Davis Cup team is better with him in it, according to captain Lleyton Hewitt.

Hewitt, who omitted Kyrgios from a February tie against Bosnia and Herzegovina for failing “cultural standards”, has ended the 24-year-old’s exile by naming him in the team for next month’s revamped finals in Spain.

Twice Grand Slam champion Hewitt has looked past Kyrgios’s recent behaviour, which has included a major meltdown at a tournament in Cincinnati in August, and subsequently branding the men’s ATP Tour as “pretty corrupt” during the US Open.

Kyrgios earned a suspended six-month ban in September for those transgressions but it only applies to the ATP Tour and not the Davis Cup.

“Nick’s a different character and I understand that and we’re not always going to put everybody in the same box,” Hewitt told reporters on Tuesday.

“You’ve got to deal with different personalities in all kind of sports, and I feel like I know Nick as well as anyone.

“I feel like on the Davis Cup court he’s done everything I’ve needed in the past whenever he’s been a part of the team. He hasn’t put a foot wrong.”

Australia have been pooled with Belgium and Colombia in Group D for the 18-nation finals in Madrid from Nov. 18-24.

Hewitt said he and Kyrgios had mended fences in March at Indian Wells and were in regular contact.

“The great thing is, he has a great relationship with all the players as well.

“It’s kind of about him wanting to be a part of the team and do the right things day in day out.