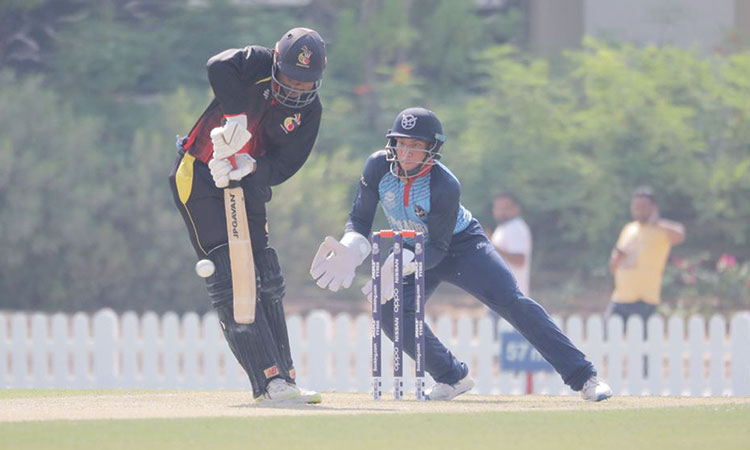 PNG’s Assadollah Vala in action against Namibia during their WT20 qualifying match on Sunday.

Riding on Assad Vala’s all-round performance and Tony Ura’s fine fifty, PNG defeated Namibia by a whopping 81 runs in their World Twenty20 qualifier to go on the top of their group in Dubai on Sunday.

Both the openers Ura and Vala gave PNG a blitzkrieg start as to set the for a big total as they shared a 125-run partnership for the first wicket in just 12.3 overs.

Ura was more brutal of the two as he raced to 71 in just 42 balls with the help of six boundaries and four sixes whereas Vala played a foil to him, scoring 48 off 34 balls , smashing five fours and over the fence.

Namibia did make some in-roads through their bowlers as they took some quick wickets to put brakes on scoring rate. But Bau played a cameo of 26 off 14 deliveries to take the score to 197.

Namibia started the chase cautiously but lost three wickets in quick successions to be pushed on the back foot completely.

They were reduced from 46/1 to 46/4 in the span of just four balls. Christie Viljoen and JJ Smith tried to anchor the faltering innings with a 34-run stand. But after the Namibia again lost three consecutive wickets on the score 80. Vala was the pick of the bowlers as he returned with a figure of 3-19.

In the other matches of the day, Canada defeated Jersey by 53 runs, Singapore stunned Bermuda by five wickets. Oman also went on the top their group with a seven-wicket victory over Hong Kong.

After restricting Hong Kong to a paltry 102, Oman chased down the target for the loss just three wickets with 2.3 overs to spare.