Messi, Suarez, Griezmann all on target for Barca as Atletico held - GulfToday

VIDEO: Messi, Suarez, Griezmann all on target for Barca as Atletico held 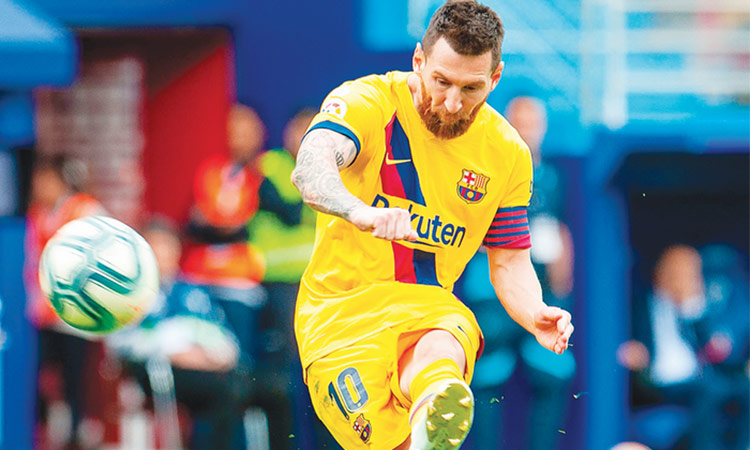 Lionel Messi scores a goal against Eibar during their Spanish League match. AFP

Barcelona’s ‘MSG’ strike force is finally clicked into gear as Lionel Messi, Luis Suarez and Antoine Griezmann all scored in a ruthless 3-0 victory over Eibar on Saturday.

Griezmann’s place in the newly-formed attacking trident has not been secure but the Frenchman opened the scoring at Ipurua before teeing up Messi and then playing the crucial pass for Suarez to make it three.

“There will be good and bad days but we are getting to know each other and bit by bit we will do even better,” said Griezmann.

An authoritative Barca display thrust them to the top of La Liga, for a few hours at least before Real Madrid play Real Mallorca. They moved three points clear of Atletico, who drew 1-1 at home to Valencia.

The victory also dismissed suggestions their players might be affected by Friday’s postponement of next Saturday’s Clasico due to protests in Catalonia.

Violence in Barcelona and disruptions at El Prat airport meant Ernesto Valverde’s side altered their pre-match routine and embarked on a 589-kilometre bus trip to the Basque County on Friday.

All the while, discussions continued over the Clasico against Real Madrid, which is now expected to go ahead in December.

“It is fashionable not to agree on political issues but at least let’s agree on the date of the Clasico,” Valverde said afterwards. “It doesn’t seem to me that difficult.” Perhaps chaos off the pitch inspired Barca to unite on it.

This was their fifth consecutive victory in all competitions, a sequence which is swiftly erasing memories of a stumbling start to the season.

The resurgence has coincided with Messi’s return from injury yet it was the fluidity and cohesion of the front three, rather than the Argentinian’s familiar solo brilliance, that will have been most pleasing for Valverde.

“With time and matches they will understand each other even more.”

Griezmann has four goals since joining Barca from Atletico Madrid last summer but a series of underwhelming showings led to Ousmane Dembele starting against Sevilla before the international break.

There was good news too for Barcelona in defence, where Samuel Umtiti came through 90 minutes in what was his first appearance of the season. Umtiti, who has been out with a foot injury, replaced the banned Gerard Pique.

The only blot on the result was an injury to Sergi Roberto, who hurt his left knee and was replaced at half-time. He will be a doubt for the Champions League game away at Slavia Prague on Wednesday.

The visiting fans chanted in support of the nine Catalan leaders imprisoned last week for a failed independence bid in 2017.

Griezmann’s finish clipped the inside of the post and found the net after 13 minutes.

Messi should have made it two before half-time but was denied one-on-one by goalkeeper Marko Dmitrovic. Suarez’s goal was ruled for offside.

Barca made it two just before the hour as Frenkie de Jong’s incisive ball was collected by Suarez. As he lost control, Griezmann took over, flicking left to Messi, who made no mistake.

The third involved all three again. Griezmann’s superb reverse pass set Messi clear and he generously slipped the ball left for Suarez who was left with an open goal.

Atletico lost ground as they were undone by a late Dani Parejo free-kick against Valencia at the Wanda Metropolitano, where both sides finished the game with 10 men.

Diego Costa scored a first-half penalty. In a mad final 10 minutes, Joao Felix limped off with all three of his team’s substitutes already used, Parejo struck in the 82nd minute and Valencia’s Lee Kang-In was sent off in injury-time.

Felix’s fitness will be a concern ahead of Atletico’s Champions League game at home to Bayer Leverkusen on Tuesday.