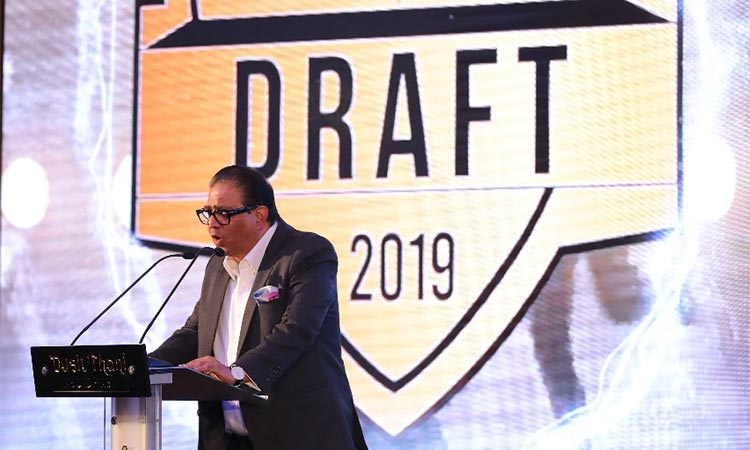 A constellation of cricket stars from across the globe descended on Abu Dhabi for the draft of the third edition of the Abu Dhabi T10 League on Wednesday.

Over 100 international cricketers went under the hammer at the glittering ceremony marked the players’ draft for different categories of Icon Player and categories A, B, C, and D.

Last edition’s Rajputs, who have been rebranded as Karnataka Tuskers, had the pick of the evening as they roped in South African great Hashim Amla as their Icon Player.

“I grew up watching all the legends present here. The lovely thing about T10 is that you cannot afford to leave a ball outside off-stump. You have to hit every ball. It is mind boggling to have a 90-minute match,” said Amla.

Amla has scored more than 17000 runs across Test and ODI formats together. He has also scored 55 centuries in both the formats put together.

The biggest surprise of the evening was the unveiling of the eighth team – Team Abu Dhabi -- that was kept under wrap. Team Abu Dhabi picked up England’s Moeen Ali as their Icon Player.

Defending champions Northern Warriors retained Darren Sammy as their Icon Player. Sammy guided West Indies to World T20 titles twice under his leadership. Sammy is considered as the one of the best all-rounders on the World. With his tricky medium pace bowling and hard-hitting batting down the order he can turn the complexion of any game. Warriors also appointed New Zealand’s former great Stephen Flemings as their coach.

“The world is moving so fast and so the cricket. It is nice to be a part of it. I am looking forward to it,” said an excited Fleming.

England World Cup winning captain Eoin Morgan was roped in as Icon Player of Delhi Bulls, which is owned by Rizwan Sajan.

Morgan is one of the most successful captains of England in limited over cricket. He also has the privilege of steering England to their first ever 50-over World Cup crown. Bulls also named Paksitan all-rounder Shoaib Malik as their Category A player.

Afridi is one of the most feared batsmen of all times. He dominated the bowlers and has several batting records in his name.

He also held the record for the fastest century in ODIs for almost 20 years before it was broken by Quinn De lock of South Africa.

Shahid was the Icon Player of Pakhtoons in the previous two seasons. Pakhtoons have withdrawn from the tournament and are being replaced by Lahore Qalandars, who also have a franchise in the Pakistan Super League. But in the PSL, Afridi does not play for Qalandars. He did not rule out joining Qalandars in PSL but made it a point that his association with the franchise is limited to the AD T 10 only as of now. However, Afridi’s association with Qalandars is limited to AD 10 not in PSL. Qalandars picked up Mohammad Hafeez in the Category A.

“It is a great format and I am looking forward for the action to unfold. It is so exciting to have result in 90 minutes,” said Andy.

“We are quite confident of winning the title as we have some very good player in the team who have a proven record in this format in the last two editions,” he said.

“I am glad not to be playing in this format. Spinners are playing big roles in T10. They can still pick up wickets and games for their teams if they apply themselves well,” said Mushatq.

Each franchise was allowed to retain a maximum of five players from the previous edition. Apart from the Icon Player Category, they could pick three from Categories A and B while two each from Categories C and D. There was also a provision of picking up two players in the special Emerging-talent Category.