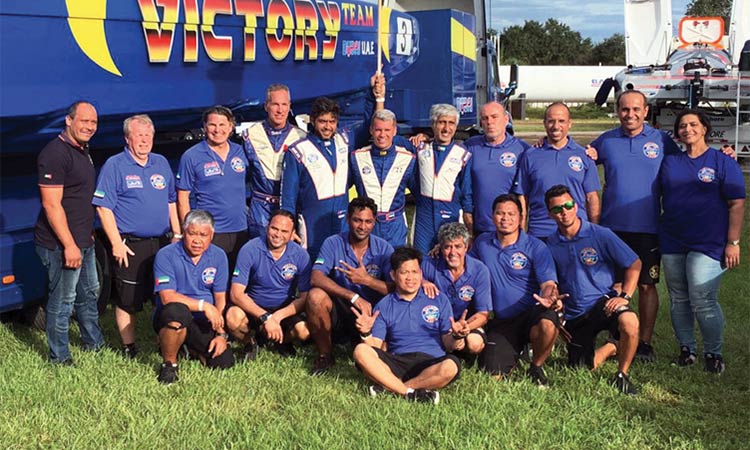 Salem Al Adidi and Eisa Al Ali guided their Victory 3 boat to a historic 15th world crown after clinching an exciting Roar Offshore race – the sixth and final round of the 2019 APBA Offshore Championship Series held at Fort Myers in Florida over the weekend.

After lead starter Jim Jackson had called for a re-start following a jump start by 222 Offshore, Victory 3 surged into the lead at the first turn, and barring a few instances when the  Australia-based team came close to over-taking, the men in blue cruised to their maiden Class One world crown along the Fort Myers Beach in the early hours of Sunday.

“I can’t describe my feeling as it’s like a dream come true for me in Class One racing. I have been waiting for this moment for a long time now, and to achieve this in the very last race with such a narrow win against some of the top boats and drivers is even greater, not just for me, but for the entire UAE. It’s a win for our country,” throttle man Ali said.

“It was a fight till the end. 222 Offshore was the biggest threat and so was Miss Geico, so the idea was not never give either of them an opportunity to pass us, and that to me, was the key for the race. We had the best of everything today – a good set-up and a good understanding between Salem and me. This was indeed a true team effort,” he added.

Tied with 82 points each after the fifth round in Michigan City, Al Adidi and Al Ali had just the top spot on their minds. And this showed as the Victory 3 boat immediately hit a speed of more than 120mph on the turn to take that first turn ahead of 222 Offshore, stable-mates Victory 33 and Miss Geico.

By the third lap Victory 33 slowed down allowing 222 Offshore to be a serious challenger to Victory 3. But Erik Stark and John Tomlinson managed to sneak in over the wake and challenge 222 Offshore from the inside and denying them a clear look at race leader Victory 3.

Sunday’s 20 points took the Victory 3 total to 102 points, while Darren Nicholson and Giovanni Carpitella’s 222 Offshore was second with 97 points and Steve Curtis and Miles Jennings followed in third with 80 points.

“I am lost for words and I don’t get the words to describe the feeling at the moment. I am very proud of my entire team for landing such an important title in the world of Class One racing.  This is historical for Victory Team on the other side of the Atlantic,” Adidi stated.

“This title is good for Victory Team and for me personally as I can now proudly say I am a world champion. This world title is perhaps the best that has happened for me and for the team.  This is the just the beginning for us all. I promise to work hard and bring even more titles home,” he promised.

By the end of the sixth lap of the 12-lap race, Victory 3 was ahead by more than a rooster tail length of 222 Offshore who were being pressured by Stark and Tomlinson in their Victory 33 boat. Assured that they were being well marshalled, Adidi and Ali just held on to their line never allowing 222 Offshore any space to gain on them.

Victory Team made its offshore powerboat racing debut in 1986, but it wasn’t until 1990 that it began to build its own boats. They made their Class One debut as a guest entry at the end of the 1992 season, and then went on to win their first world title the following year.

Since then, Victory Team has gone on to win an amazing 14 Class One World Championships with the last one of these coming at the end of the 2014 season.

“I am very happy with what we have achieved. It was a very competitive race and it is an amazing feeling to see these young drivers [Salem Al Adidi and Eisa Al Ali] achieve this feat.  The competition level was very high and this makes our first world championship in the US even sweeter. We raced against one of the top teams in the world, the 222 Offshore Racing team and of course the legend that is Steve Curtis in Miss Geico,” chairman of the Victory Team’s Board of Directors, Huraiz Bin Huraiz, stated.

“This is a very good platform for this year and it is pointing to a promising next season. We have been assured that the championship will get even stronger as every other team will want  to beat Victory Team, the world champions,” he added.