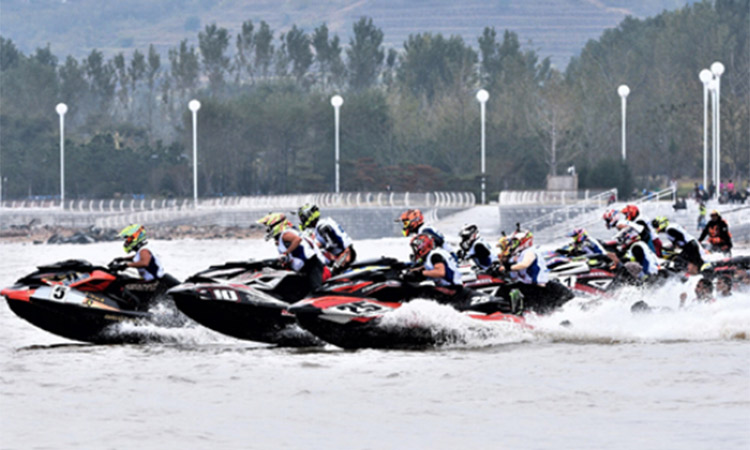 Boats in action during a UIM-ABP Aquabike World Championship race in China.

Tayer’s hopes of a second Grand Prix victory of the season were effectively ended when his race engine was delayed at customs en route to the Grand Prix of Qingdao, penultimate round of the UIM-ABP Aquabike World Championship.

Forced to compete on a bike rented locally by the team and conceding a big power advantage, Tayer fought his way to seventh position in Saturday’s first moto to hold third place overall in the world championship.

The result left him ten points behind Denmark’s championship leader Marcus Jorgensen who was beaten into second place by Kuwait’s Yousef Al Abdulrazzaq.

With a second moto rounding off the action in China on Sunday afternoon, Tayer will be aiming to secure enough points to give himself a fighting chance in December’s title deciding final round in Sharjah.

In freestyle, Mulla moved towards a ninth successive Grand Prix victory and a second world title by winning the first moto from Roberto Mariani to extend his championship lead over the Italian to 15 points.

Meanwhile, Victory Team rider Kevin Reiterer further strengthened his position for a possible third Ski GP1 world crown after powering his way to victory in the opening moto of the Grand Prix of Qingdao in China on Friday.

Reiterer, who had a clear lead going into this weekend’s third round of the 2019 UIM-ABP Aquabike World Championship, won the only moto of the day to take his points tally to 172 and stay 56 points clear of main challenger Daniel Svae Andersen of Norway (116 points) who went on to finish second. Hungary’s Barnabas Szabo managed to keep his hold on third place with 102 points.