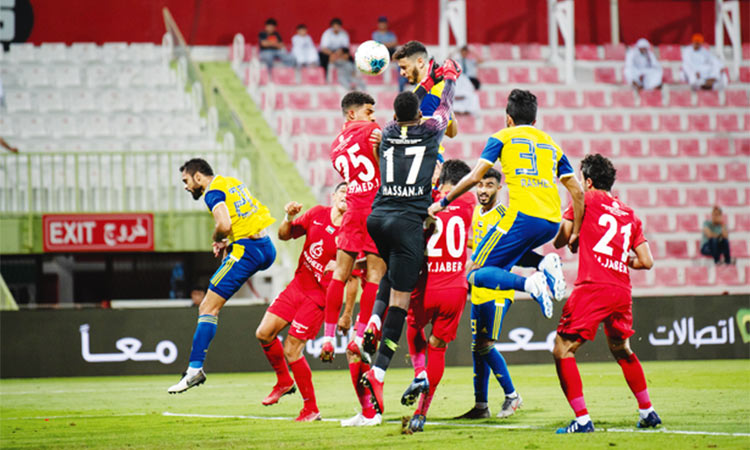 Shabab Al Ahli and Al Dhafra players vie for the ball during their Arabian Gulf Cup match on Saturday.

On the 15-minute mark, Al Dhafra spurned a golden chance to take lead as they were awarded a penalty kick after Leonardo De Sousa handled the ball inside the box. Joao Pedro failed capitalize on the opportunity to score from the spot as his effort was denied by Hassan Hamza.

The guests continued to push forward and they nearly broke the deadlock around the 30-minute mark through Diego Koester, whose free-kick strike cannoned off the crossbar.

After the restart, Shabab Al Ahli came close to leveling the scoreline when De Sousa released Luvannor Henrique behind Al Dhafra’s defence, but the latter’s shot was cleverly saved by Khaled Al Senani.

The hosts failed to make an impact in the second half and three minutes before the full-time whistle, Pedro secured the victory for the visitors.

The Brazilian got at the end of a loose ball and headed into the back of the net after poor communication between Hamza and his defenders.

Meanwhile, Jhonnattann Benites netted the only goal of the game as Fujairah edged Hatta 1-0 at Fujairah Stadium in matchweek 4 of the Arabian Gulf Cup on Saturday.

Both teams failed to pose enough threat on goal during the first half, with most of their activity being concentrated in the midfield.

Just before the break, Fujairah missed a chance to take the lead. Darwish Bin Habib pulled off a double save as he denied Khalifa Khater before Jhonnattann Benites latched on the rebound, but his effort was also saved by the keeper.

The Brazilian forward, however, needed just two minutes after the restart to net the opener and put the hosts 1-0 up. Following a defensive blunder, the ball fell to Jhonnattann off a long pass and the 30-year-old burst inside the box before slotting the ball into the bottom corner of the net.

The home side came close to extending their lead on the one-hour mark, but Fernando Gabriel’s strike from the edge of the box hit the woodwork.

Hatta missed a chance to level the scoreline 18 minutes from time as Victor Nwaneri’s effort hit the woodwork. Substitute Mohamed Gamal missed another chance seven minutes later as his strike from the edge of the box went over the bar.

Fujairah maintained their positive results in the cup as they now sit second on Group B with seven points, while Hatta remain winless at the bottom of the group on one point only.

Elsewhere, Maroof netted a brace to guide Al Ain to an easy 3-1 win over Al Nasr at Hazza Bin Zayed Stadium in matchday 4 of the Arabian Gulf Cup on Friday night. 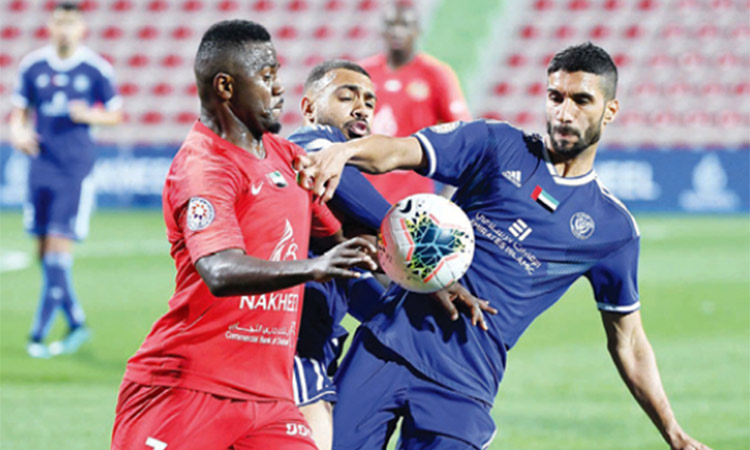 Alvaro Negredo scored at the death as Al Nasr held Shabab Al Ahli to a 2-2 draw, at Rashid Stadium in matchweek 18 of the Arabian Gulf League on Friday. 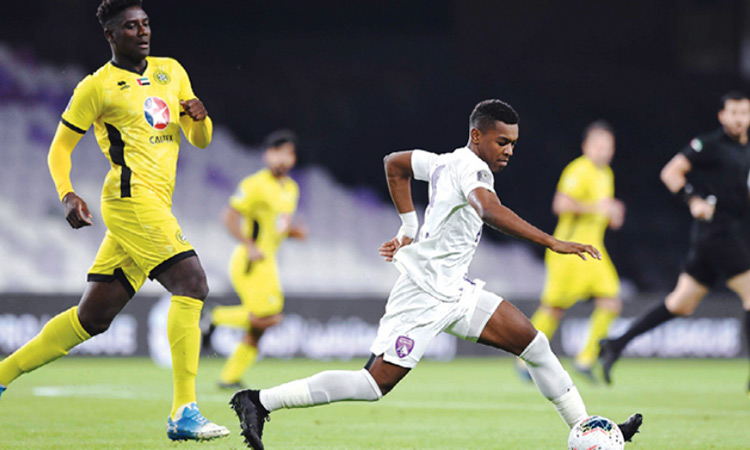 Al Ain were held by Kalba to a 1-1 draw, at Hazza Bin Zayed Stadium in matchweek 6 of the Arabian Gulf Cup Group A. Al Ain got off to an electrifying start, when Salem Abdullah went up the left flank and sent an accurate cross 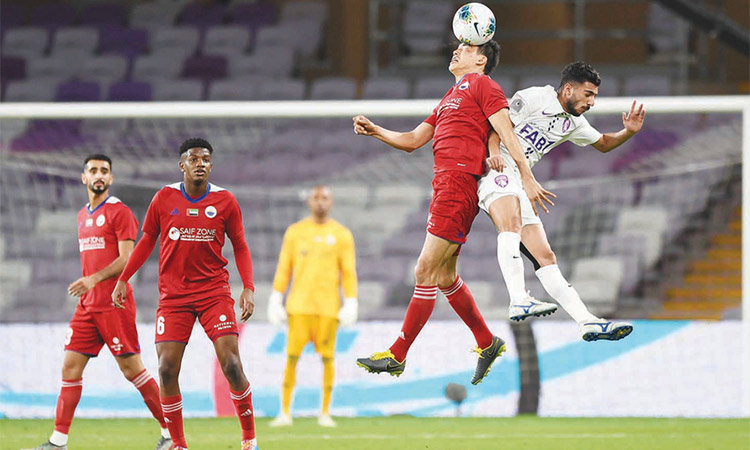