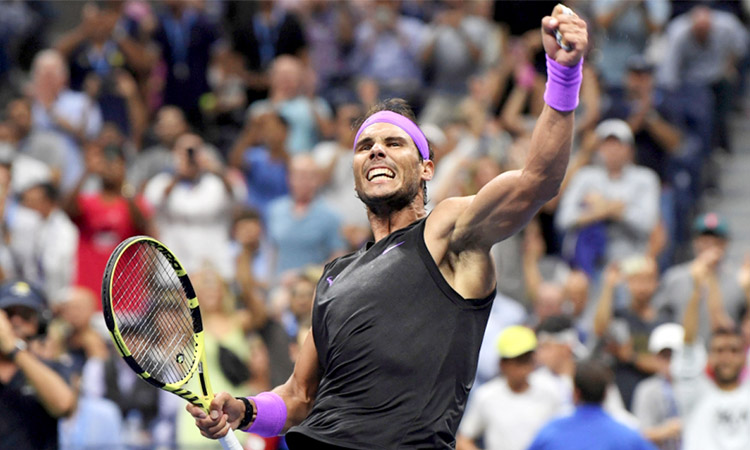 Since making his debut in the inaugural event in 2009, Nadal has become one of the best tennis players of all-time, winning 13 of his 19 Grand Slam titles in the process. He has claimed the Mubadala World Tennis Championship title four times, with his most recent victory coming in 2016 with win over David Goffin in the final.

The left-handed superstar will be looking to land a record fifth title in December - he is currently tied on four victories with Novak Djokovic.

So, as he prepares to mark 10 years of competing at Abu Dhabi’s International Tennis Centre at Zayed Sports City, Nadal is making it an extra special occasion for spectators.

In addition to capitalising on the added festive feel afforded by the new dates for the 12th edition of MWTC, which has been brought forward a week from its traditional spot on the calendar, the man known as ‘The King of Clay’ has an incredible offer for those keen to catch him in action.

Anyone who buys a ticket for the three-day tennis championship in the next 10 days instantly stands a chance to win one of 10 pieces of Mubadala World Tennis Championship memorabilia signed by the man himself! A lucky winner will be chosen daily.

This year’s tournament is taking place from Dec. 19-21, appealing to both international visitors eyeing a unique experience in Abu Dhabi’s famed winter sun, and UAE residents seeking some festive fun without having to travel, Nadal can’t wait to celebrate with his fans in Abu Dhabi. He’s been making friends, winning trophies and enjoying the warm weather of an Abu Dhabi winter for a long time.

Speaking about the Mubadala World Tennis Championship, he said: “I’ve been here plenty of times, it’s a great event with fantastic organisation. It is a very nice place with friendly people and the atmosphere on court is fantastic.”

Make way for the best and secure your seats now. In addition to three days of top-class tennis action, spectators will be treated to a host of off-court activities, player interaction in the form of tennis clinics, autograph sessions, Q&A sessions, and interactive competitions.

For your chance to win merchandise signed by current Word No. 2 and 19-time Grand Slam champion, all you need to do is purchase your tickets from www.ticketmaster.ae

Fresh from contesting one of the most memorable Grand Slam title tussles of all-time, Nadal and Daniil Medvedev are poised to renew their epic US Open final rivalry in Abu Dhabi, after the Russian was also confirmed for the tournament.

Depending on the draw for December, the pair could well be picking up where they left off in the UAE capital. Nadal, who won the title in 2010, 2011 and twice in a calendar year in 2016 is looking forward to returning to the UAE capital, where he lost in the 2018 semi-final to South African Kevin Anderson.

Medvedev will be looking for a bit of “home support” when he makes his Mubadala World Tennis Championship debut as he looks to go all the way having lost out to Nadal in the US Open.

“I’ve heard so much about the Championship from my friends and there’s a lot of Russian support in Abu Dhabi. I know it’s also a popular holiday destination for my fellow countrymen so hopefully I can draw on that in my first appearance,” said the 23-year-old Russian.

“I know the line-up will be very strong so it will be a good test of where I am heading into the new season as I look to build on what has been a great year for me so far. I will give my all and put on the best show possible for the spectators. I’m really looking forward to it.”