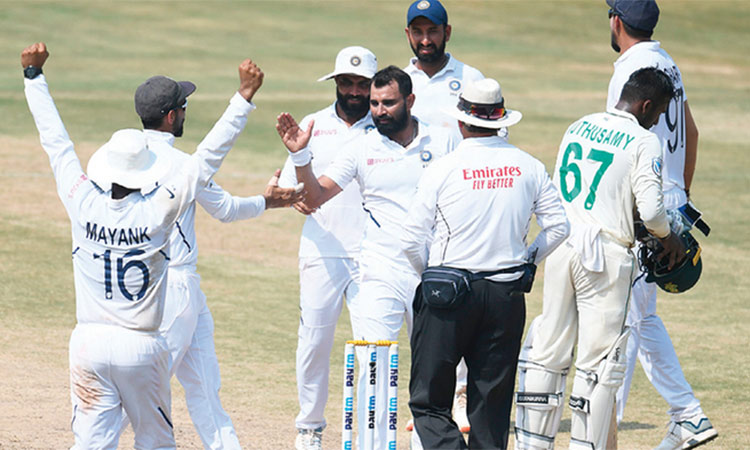 India’s pace spearhead Mohammed Shami was instrumental in the victory over South Africa in the first Test. Reuters

India bowling coach Bharat Arun on Tuesday said that all the pacers in the team have the ability to reverse the ball on wickets which offer it, a reason for their success in Test cricket.

India rode on Mohammed Shami’s brilliant spell in the second innings of the first Test on a docile pitch in Visakhapatnam when he claimed a five-wicket haul to help the hosts beat South Africa by 203 runs.

“South Africa batted exceptionally well in the first innings. In the second innings, there was assistance to Shami’s kind of bowling. And then he came up with a magnificent spell,” Arun told reporters two days ahead of the second rubber here.

Chasing a 395-run target, the Proteas lost early wickets and were on the verge of losing the match by a margin of over 250 runs. Dane Piedt (56) and debutant Senuran Muthusamy (49 not out) though stitched together a 91-run stand for the ninth wicket and extended India’s stay on the field. Muthusamy latter joined hands with Kagiso Rabada to add another 30 runs for the last wicket. But their effort was not enough to force a draw and they lost the match to be 0-1 in the three-match series.

“Also if you look at how Dane Piedt kept ninth wicket stand and last wicket too... it shows their resistance.

“It was a magnificent spell by Shami that put us back in the game. Otherwise given the conditions, it would have been very difficult. We were aware we needed to work really hard to get the result. On that wicket it needs lot of patience,” Arun said.

Asked about turning tracks testing the skill of the quicker bowlers, the Indian bowling coach heaped praise on his bowlers and domestic cricket for allowing them to learn the art.

“Our bowlers are skillful at reverse swing as when they play domestic cricket, wickets generally are flat. The outfield is also not at times great. For a bowler to be successful, he needs to learn how to reverse the ball and that’s where our domestic cricket contributes a lot.”