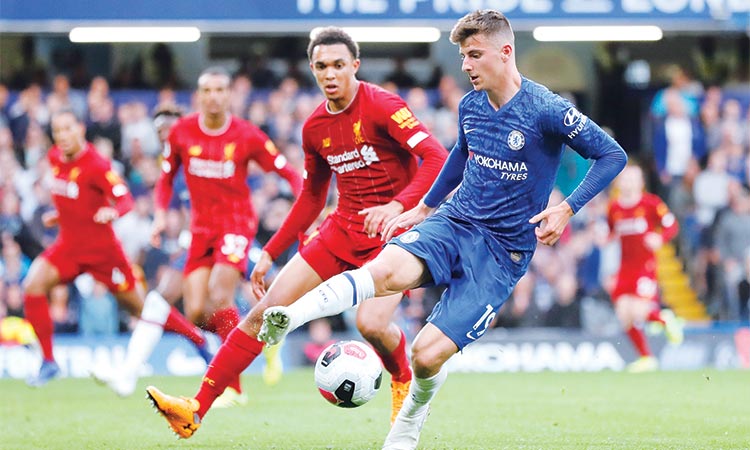 Chelsea’s Mason Mount (right) vies for the ball with Liverpool’s Trent Alexander-Arnold during their EPL match on Sunday. Associated Press

Jurgen Klopp’s side extended their perfect start to the title race as they became the first club to win their opening six games in consecutive top-flight seasons.

Roberto Firmino increased Liverpool’s advantage before the interval and N’Golo Kante’s fine goal was not enough to give Chelsea tangible reward for a vibrant second half.

After Manchester City thrashed Watford 8-0 on Saturday, this was the ideal response from Liverpool as they bid to win the title for the first time since 1990.

Pipped to the trophy by City on the final day of last season, Liverpool are playing with a burning desire to end their rivals’ two-year reign as champions.

In contrast to the Champions League holders’ scrappy midweek defeat at Napoli, this disciplined display showed the Premier League is Liverpool’s top priority this term.

They are on a club-record run of 15 successive league wins and have lost just once in 45 top-flight matches, going unbeaten in the last 23.

Significantly for their title prospects, Liverpool’s success at the Bridge was just their second win in 13 away league games against the other established top-six teams.

Ten-man Arsenal twice came from a goal down to claim a much-needed 3-2 win over Aston Villa in dramatic fashion thanks to Pierre-Emerick Aubameyang’s free-kick six minutes from time at the Emirates.

But they showed no little spirit as Calum Chambers looped home an equaliser before Aubameyang took centre stage to rifle home a free-kick from the edge of the area.

A vital three points, which lifts Arsenal up to fourth, is a huge boost for Emery, who has faced questions in recent weeks over his ability to lead the Gunners back to the Champions League next season.

The Spaniard still has to find the right balance in midfield to protect an ailing defence, but with Aubameyang and Pepe in attack, Arsenal always look capable of scoring.

Maitland-Niles’s nightmare afternoon began after barely a minute when he blazed over Arsenal’s best chance of the first half.

The right-back then dragged down Anwar El Ghazi for an early booking that was to prove costly.

Andriy Yarmolenko’s goal shortly before half-time and a wonderful late Aaron Cresswell free-kick mean United have not won away from Old Trafford in any competition since March.

Manuel Pellegrini’s West Ham are now unbeaten since a 5-0 drubbing by Manchester City in the first match of the season and the win lifted them into the top four ahead of the later matches on Sunday.

But it was a chastening day for Solskjaer’s men, just a day after City came close to matching United’s Premier League record for margin of victory -- 9-0 against Ipswich in 1995.

Missing Paul Pogba and Anthony Martial, the visitors were woefully short of creativity in midfield and toothless in attack.

United, who started the season by thumping Chelsea 4-0, have lost twice already in their opening six league games and are without an away win in any competition since their dramatic Champions League victory against Paris Saint-Germain.