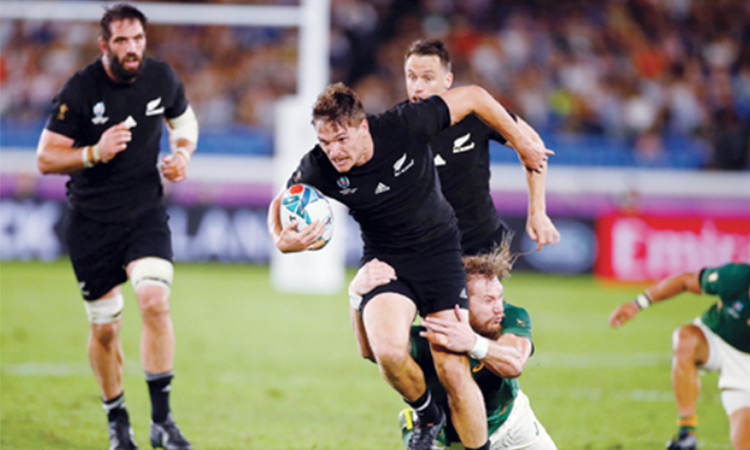 Defending champions New Zealand put the rugby World Cup on notice with an impressive 23-13 win over South Africa on Saturday after France and Australia both survived major scares.

The All Blacks have been much maligned heading into their third consecutive title defence but they floored the Boks with 17 points in just five first-half minutes to silence their critics.

It was the culmination of a thrilling first full day of action at the tournament in Japan after Australia came from behind to beat Fiji 39-21, and France scraped past Argentina 23-21.

“Today was a big game for both sides and fortunately for us, we came out on top,” said All Blacks coach Steve Hansen.

“It was another titanic struggle between New Zealand and South Africa and hopefully the people watching here today enjoyed it and got excited by it.”

In Yokohama, the venue for the final on Nov.2, New Zealand went behind to an early penalty but they turned the game on its head with two silky tries to lead shell-shocked South Africa 17-3 at the break.

George Bridge went over after a breathtaking counter-attack, and Scott Barrett galloped in for New Zealand’s second following another flowing move when Anton Leinert-Brown stepped past a group of Springbok defenders.

Handre Pollard potted a drop goal to make it 17-13 but penalties to Richie Mo’unga and Beauden Barrett ensured New Zealand seized control of Pool B.

France and Argentina came to blows at the end of their match after Emiliano Boffelli’s last-gasp penalty miss allowed Les Bleus to sneak home by just two points.

Gael Fickou and Antoine Dupont both scored brilliantly as France led 20-3 at the break, before Argentina came storming back with two near-identical catch-and-drive tries to Guido Petti Pagadizaval and Julian Montoya.

Benjamin Urdapilleta slotted two penalties to give Argentina a 21-20 lead but Camille Lopez’s cool drop goal put France back in front, and the unfortunate Boffelli missed his chance for glory when he put his penalty wide.

The indoor Sapporo Dome witnessed some bone-crunching collisions as Fiji led Australia 21-12 early in the second half, before replacement scrum-half Will Genia inspired Australia’s recovery and bonus-point win.

Tolu Latu crashed over twice, and Samu Serevi and Marika Koroibete also crossed in the second half following scores by Michael Hooper and Reece Hodge in a helter-skelter first period.

“They’re such a dangerous team, we knew that very well,” said Wallabies coach Michael Cheika. “It’s what we expected (but) we probably didn’t expect to be so far behind.

“We made a few errors that let them into it but we recomposed ourselves, went back to basics and were able to get it done.”

Also on Saturday, tournament organisers warned teams about possible disruption from an approaching typhoon and closed two fanzones in southwestern Japan as a precaution.

The storm -- packing wind gusts of up to 180 kilometres (110 miles) per hour -- is now heading north and is expected to move through the sea separating South Korea and western Japan.