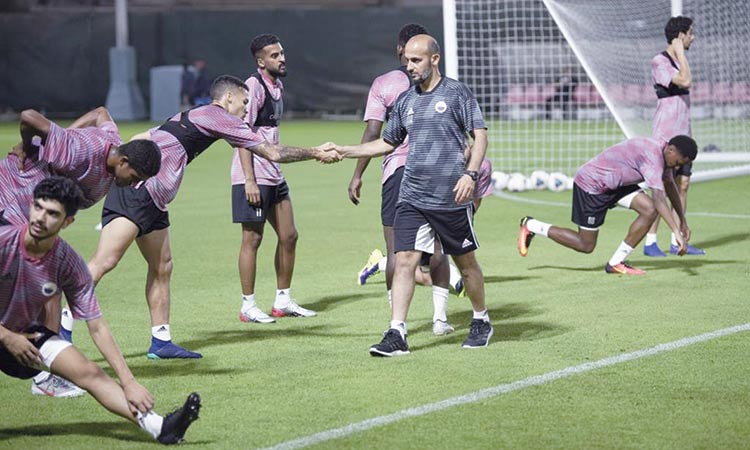 Sharjah players attend a training session ahead of their season opening match against Khorfakkan.

The Kings have already laid down the gauntlet by beating Shabab Al Ahli Dubai in the traditional curtain-raiser Arabian Gulf Super Cup.

Sharjah will start their title bid against Khorfakkan in a late kick-off while Shabab Al Ahli Dubai meet Hatta on Thursday.

Sharjah were not considered serious contenders despite being on the top at the beginning of the last season. But a resilient Sharjah continued their resurgence under the Emirati coach Abdulaziz Anbari to emerge as the champions, losing only one match towards the end of the season.

And they seemed to pick up whence they leftas Shabab Al Ahli once again failed to stop their juggernaut, losing their third match in a row against the Kings at the Super Cup, having been beaten up in the league on two previous occasions last year.

Speaking at a press conference ahead of the match Anbari said: “I hope that we will succeed quickly to overcome the joy of winning the Arabian Gulf Super Cup and enter the league matches.

“Being the champion of the competition increases the pressure on us, but we as a board and technical staff have a clear goal in this season.

“We have to be in the competition all the time. It is not good to be out of the contention for a long time. We strive to continue to lead from the front in every match,” said Anaberi.

About the wholesale changes that have been made by Sharjah during the transfer window he informed: “The presence of more new players this season is useful, but we care about the readiness more than the number.

“In the previous season, despite the fewer numbers, we found alternatives whenever we needed them and we played some games in the absence of three key players.

“The shortage of one player has affected our performance against Shabab Al Ahli significantly in the Super Cup, but we emerged winners.”

Sharjah were reduced to 10 men and had to battle for over one hour after Saleh Al Hasan was handed a red card for a dangerous tackle against Shabab Al Ahli’s Abdulaziz Hussain Al Mubarak.

Commenting on star striker Ricardo Gomez he said: “Our choice of Ricardo was not a flash in the pan but it was done carefully after studying and planning the possibility of his integration with the group quickly. It happened quickly, as he is getting along well with the others. He is doing great and and communicating with the national players well, who are also performing well.”

Meanwhile, Sharjah’s Ryan Mendez said: “We are preparing well for the match against Khorfakkan. The pressure is always on us and I think after winning the league and the Super Cup it has increased more.

“All the teams now look at us as a competitor, striving to win it and we are aware of this very well.”

Meanwhile, Al Ahli Shabab coach Rodolfo Arwabarina exuded confidence to bounce back and lauded the rich haul of players at his disposal to choose from, saying: “We have a host of great players at our disposal. We can choose players from the U-21 team who have played well and have performed well. We have both local and foreign players and we will make sure we pick the best for each match.”

Commenting on the loss against Sharjah, he said: “For the defeat in Super Cup, we certainly had the ambition to win it but we did not succeed in achieving our goals.

“We did not leave any stone unturned during the game, everyone gave everything he had. The players were keen to perform well but football is like this and we have to accept all the possibilities,” he concluded. In the other matches on the match day 1 of the first week, Bani Yas clash with Ajman and Al Jazira face Al Dhafra.

Last season, Al Dhafra defeated Al Jazira 3-2 before playing out a 1-1 draw away from home in the second half of the season. The Pride of Abu Dhabi, who finished off last season in fifth season, will be looking to kick off the campaign on the right foot especially after signing a number of important players during the transfer window.