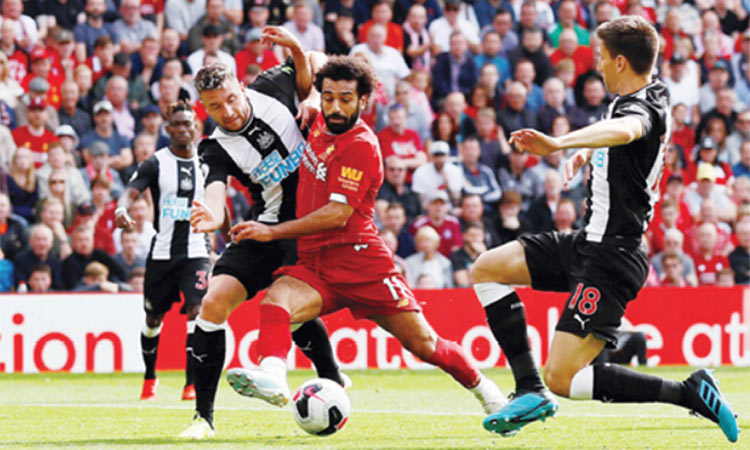 Liverpool’s Mohamed Salah vies for the ball with Newcastle United’s Paul Dummett and Federico Fernandez during their EPL match on Saturday. Agence France-Presse

Newly-promoted Norwich stunned Manchester City with a 3-2 win at Carrow Road to inflict a first Premier League defeat on the English champions since January.

Kenny McLean, Todd Cantwell and the prolific Teemu Pukki took advantage of a ragged City defence without the injured Aymeric Laporte for a remarkable upset.

Tammy Abraham’s sensational form continued as the English forward scored a hat-trick as Chelsea romped to a 5-2 win at Wolves.

Spurs were 4-0 up by half-time against Crystal Palace to record just their second win of the season as Son Heung-min scored twice, while Erik Lamela and an own goal from Patrick van Aanholt rounded off the scoring on a miserable day for the Eagles.

An injury-hit Manchester United also coped without Paul Pogba to inflict Leicester’s first defeat of the season as Marcus Rashford scored the only goal from the penalty spot in a 1-0 win at Old Trafford.

United join Tottenham and Chelsea on eight points from five games, but Liverpool protected the only 100 per cent record in the league by reacting to a slow start in style.

Manchester City can close the gap at the top to two points with victory later on Saturday at Norwich.

Jetro Willems fired Newcastle in front on seven minutes to leave the European champions trailing at Anfield for the first time since March.

Sadio Mane fired into the top corner to start the revival, but it was the introduction of Roberto Firmino off the bench for the injured Divock Origi that truly turned the tide in Liverpool’s favour.

The Brazilian’s through ball was spilled by Martin Dubravka to allow Mane a simple task for his second just before half-time, and another brilliant Firmino flick teed up Salah to seal the points 18 minutes from time.

“I started enjoying after 25 minutes, around about when we arrived finally in the game,” said Liverpool manager Jurgen Klopp.

“Second-half we scored only one goal, but we played really good football and I liked it a lot.”

Frank Lampard has endured a difficult start on his return to Stamford Bridge as manager, but he enjoyed his finest day so far in charge of the Blues with his faith in youth again fully vindicated.

Fikayo Tomori, 21, fired the visitors in front at Molineux with his first goal for the club before Abraham took over to take his tally to seven in his last three games with three brilliant finishes from close range.

“All three goals were so different, it just shows what he can do,” said Lampard.

“I am so delighted for him. I know how hard the academy works and Tammy has an enthusiasm to score goals. He has a fantastic approach to the game and how he wants to progress.”

Abraham’s busy afternoon was not over as he then turned into his own net and Patrick Cutrone cut Wolves’ deficit to two before Mason Mount rounded off the scoring for Chelsea late on.

Tottenham manager Mauricio Pochettino hoped that the end of the European transfer window would settle his squad and the Champions League finalists looked more like their old selves by tearing apart Palace from the off.

Son was the star as the South Korean opened the scoring then finished off a fine team move by volleying home Serge Aurier’s cross after Van Aanholt deflected a cross into his own net.

Harry Kane was unable to build on his goalscoring form for England, but did play a part in the fourth as his cross was turned home by Lamela.

United had to suffer far more for just a second win in 10 league matches.

Rashford shrugged off his recent miss from the spot in defeat to Palace to convert a penalty on eight minutes after he had been brought down by Caglar Soyuncu. 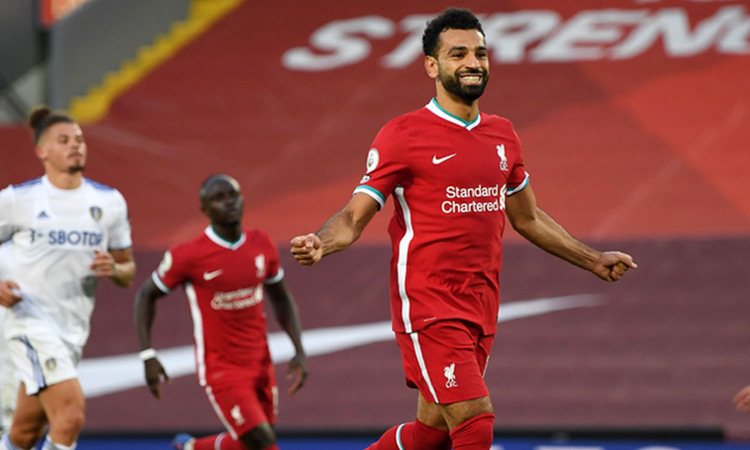 Mohamed Salah scored a hat-trick as Liverpool saw off three fightbacks from Leeds to begin their defence of the Premier League with a thrilling 4-3 win at Anfield.