India overcome Bangladesh in thriller to win U-19 Asia Cup 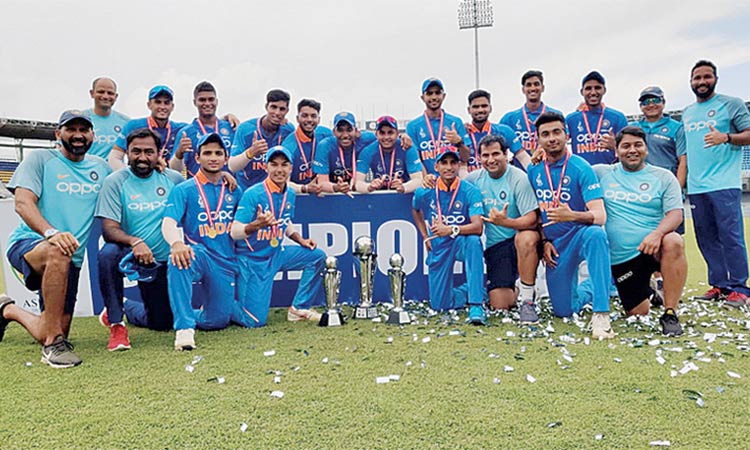 The victorious Indian team pose with the winners’ trophy after beating Bangladesh in the U-19 Asia Cup final in Colombo on Saturday.

India colts came out with a brilliant bowling display to defeat Bangladesh by a mere five runs in a low-scoring thriller to win the U-19 Asia Cup in Colombo on Saturday.

After a dismal batting performance saw them get bowled out for a paltry 106 in 32.4 overs, the Boys in Blue held their nerves and bundled out Bangladesh for 101 to clinch the title at the R Premadasa Stadium. Left-arm spinner Atharva Ankolekar was the star of the match as he picked up 5 wickets for just 28 runs in his 8 overs to keep the Bangladesh batsmen in check throughout the course of their chase.

He was well supported by pacer Akash Singh (3/12) who didn’t allow the opponents to get off to a good start, while Vidyadhar Patil and Sushant Mishra picked up one wicket apiece.

Only three Bangladeshi batsmen could reach the double-figure mark, with captain Akbar Ali top scoring with 23.

Earlier, opting to bat, only Karan Lal (37) and captain Dhruv Jurel (33) could resist the carnage unleashed by the Bangladeshi bowlers.

Apart from the two, only Shashwat Rawat scored in double figures as he contributed with a valuable 19.

Ankolekar was adjudged Player of the Match for his brilliant fifer while opener Arjun Azad bagged the player of the series honour for scoring 202 runs in four games this tournament.