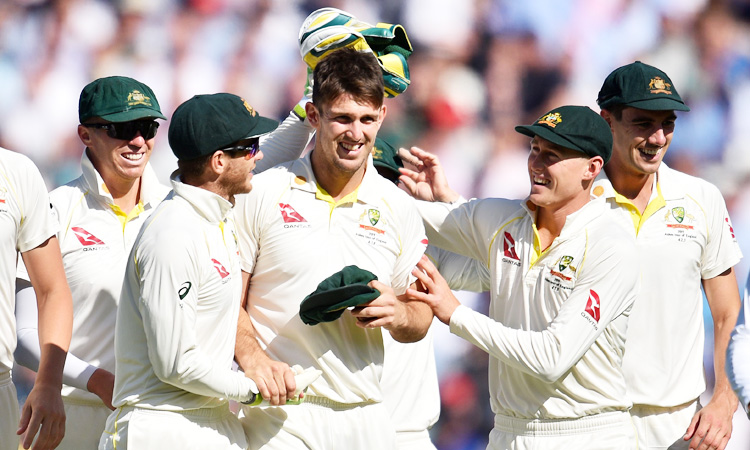 Mitchell Marsh celebrates taking the wicket of England's Jack Leach (unseen) for 21 runs at The Oval in London on Friday. Glyn Kirk/ AFP

Australia dismissed England for 294 on the second day of the fifth Ashes Test at the Oval on Friday, with dangerman Jos Buttler adding just six to his overnight score.

Buttler counter-attacked on Thursday after an England collapse but was bowled by Pat Cummins for 70 as he tried to smash the paceman.

Jack Leach was bowled by Mitchell Marsh in the following over, with the recalled all-rounder returning figures of 5-46.

Cummins, the top-ranked bowler in the world, took 3-84.

Tim Paine's Australia are seeking their first series win in England since 2001 and will fancy their chances of building a substantial first-innings lead on a pitch that looks good for batting.

The home side, desperate to level the series at 2-2, have struggled to find consistency and contributed to their own downfall at the Oval, slipping from 170-3 to 226-8 on Thursday.

Australia won at Old Trafford last week to take a 2-1 lead in the five-match series, meaning they will retain the Ashes urn regardless of the result at the Oval.