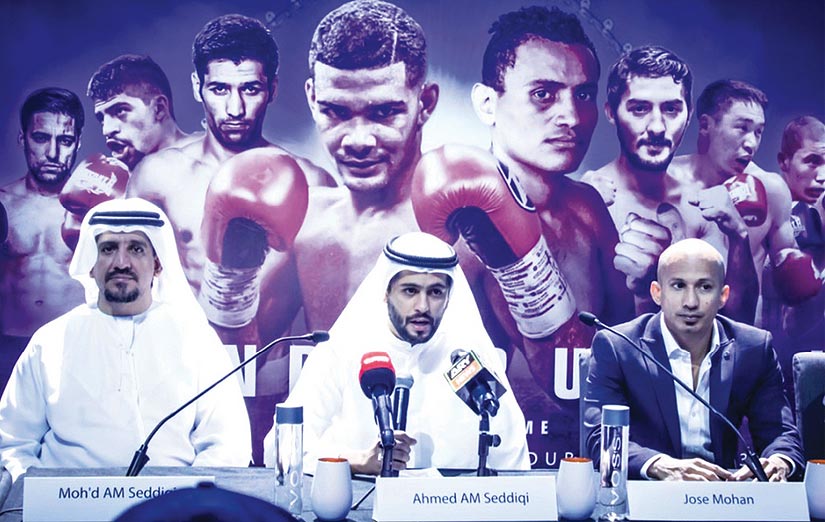 Stars such as Muhammad Waseem and Andrew Selby are raring to go after the final press conference and weigh-ins for Friday’s sold-out #RotundaRumble at Dubai’s Caesars Palace on Hublot Time.

Pakistan’s Waseem (8-1, 6 KOs) – a world title challenger last year – tops the bill against Conrado Tanamor (11-3, 4 KOs) as he begins a second climb towards the summit of the sport while world-class Welshman Selby (11-1, 6 KOs) is also on the hunt for major titles.

On a busy fight card in the most luxurious surroundings of Caesars Palace Bluewaters – broadcast live and exclusive on iFL TV, born-and-bred Dubai boxing hero Majid Al-Naqbi (2-0, 1 KO) is meanwhile delighted to fight in front of his home fans for a third time.

The historic card will be promoted by Round 10 Boxing in association with MTK Global, with all tickets now snapped up ahead of the show.

Round 10 Boxing Club owner & MTK Global Adviser for Mena region Ahmed A Seddiqi, said at the final press conference, ahead of the event, “First and foremost, we are very proud to partner with MTK Global, Hublot and the Dubai Sports Council for this spectacular night of boxing.

“We plan to make Dubai as the next hub of international boxing in the Middle East and this is the right step towards that direction. We look forward to staging more shows like this.”

Pakistani pugilist Mohammad Waseem will be trying to bounce back from his first career loss when he faces Philippines’ Conrado Tanamor in their flyweight bout on Friday.

Waseem, 32, who last year floored IBF flyweight champion Moruti Mthalane in a world title fight but ended up losing by unanimous decision, will be in action for the first time in 2019 with redemption on his mind.

It is pertinent to mention here that Waseem had been training in Scotland for the last six to seven months. I’m so excited. Hopefully this will lead to me fighting for a world title in my country back in Pakistan.

“I’ve been training very hard back in Scotland and I know I’ll be a world champion soon. I think I’ll go for a knockout. This has been a six-month camp!”

His coach Danny Vaughan acknowledges that Tanamor will be a tough proposition but backed his own boxer to emerge victorious.

“Waseem has been training really hard for the fight,” Vaughan said. “His opponent (Tanamor) is a very strong fighter but we are confident. Waseem is itching to compete and get this opponent out of the way.”

Tanamor (11-3-0), who is three years Waseem’s junior, had an impressive start to his professional career, winning his first 10 bouts before losing way and dropping three straight.

He, however, did recover from the triple setback by beating his compatriot Ronnie Sunide in his last fight.

Meanwhile, ahead of his fight against Thai Worawatchai Boonjan, Selby said, “The fans can expect a really great performance from me. I’ve had a very hard training camp. I won’t go looking for the stoppage – I’ll show my boxing skills and I’m getting ready for big title fights.

“I’d like to say a big thank you to Round 10 Boxing, Ahmed A Seddiqi and MTK Global for having me here in Dubai. I promise to show you some great boxing.”

Al-Naqbi, who is readying for his bout against Chinese boxer Chuansheng Zhang, said, “This will be the third time I’ve fought here in Dubai and I really enjoy it. Tomorrow, it’s fight night! I can’t wait to fight.

“I want to say thank you to MTK Global, Round 10 Boxing Club and Ahmed A. Seddiqi and all people who support. I really can’t wait for tomorrow.”

Alongside the trio on the night, promising German Abass Baraou (6-0, 3 KOs) collides with the unbeaten Abdelghani Saber (8-0-1, 8 KOs) and there are also chances to shine for Abay Tolesh, Rohan Date, Anahit Aroyan, Hasibullah Ahmadi and more.