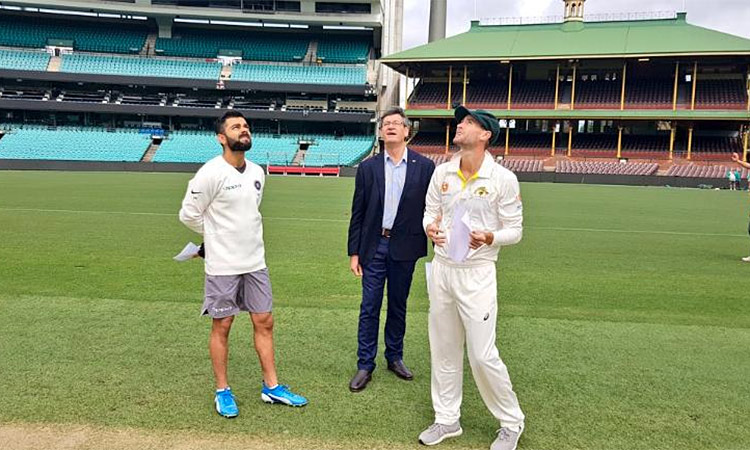 Virat Kohli walked out for the toss wearing shorts for a warm-up match in Sydney recently. (BCCI Photo)

Almost a century after maverick tennis player Bunny Austin decided to wear shorts at Wimbledon, could the same thing be about to occur in the other sport known for its all-white uniform?

One standout suggestion is that players could ditch the tradition of wearing trousers on the field, in favour of shorts.

The move is inevitable, one of the Hit for Six report authors told The Independent.

Professor Mike Tipton of the Extreme Environments Laboratory at the University of Portsmouth said: “What we’re trying to do with all of this is raise climate change in people’s minds so they realise this is an extinction-level problem. Anything that will reduce the thermal burden on, in particular, batsmen, bowlers, wicketkeepers, is likely to help them maintain their performance.”

He also suggested batters’ helmets and hefty leg pads could also be redesigned to promote cooling.

“For cricketers it’s almost a perfect storm,” he said. “They’re stuck in the middle of a pitch with no shade, they’re going to have thousands of watts per metre square of sun beating down on them, they are exercising harder than most people think, particularly batsmen who are doing the equivalent of about an 8km per hour run, so they’ve got a large thermal load from the environment, they’ve got a large thermal load from their own bodies producing heat with exercise, then, just to cap it all off, we stick a load of clothing, padding and a helmet on them.”

Asked if he thought it was inevitable players would wear shorts in the future, he said: “Yes, I do.”

He added: "For the spectator, unless some things change, they won’t have the same spectacle. Performances will deteriorate. Anyone who’s ever tried to do anything while they’re overheating will realise the motivation to do stuff – the ability to think while you’re doing it and the performance level you achieve, is diminished, and as a consequence the spectacle of cricket will be diminished as well.”

In 2017 England Captain Joe Root was forced to retire from a match in Sydney due to dehydration after temperatures climbed higher than 43˚C.

The report, published earlier this week, details how batsmen and wicketkeepers are becoming increasingly susceptible to poorer performance as heatwaves continue to turn more extreme and frequent in cricket-playing nations.

The authors’ core recommendations were that more games may need to be postponed or rearranged to cooler times of the day, as the world warms.

He told The Independent: “Wearing shorts is a change I would like to see. It will help fast bowlers and be a visible sign that the sport is taking climate change seriously. The resulting public debate would also focus the minds of the fans. Climate change is not going away and we need to all up our games to both achieve net zero emissions and to live and work in a warmer world.”

Dominic Goggins, an environmental policy consultant who also worked on the report, also told The Independent: “I think the point about the shorts recommendation was there was lively discussion around it.

“Whether it happens or not will be up to [cricket’s governing bodies], but what we’re clear on is that it should be based on a solid risk-based analysis country by country which involves the cricket board in a meaningful way, and then they can properly adapt to the way in which climate change is going to affect cricket in the locations they’re responsible for.”

Goggins said while shorts was one suggestion, other measures such as stopping play over certain temperatures – just as rain stops play during tennis games – was perhaps a more “telling disruption” about climate change.”

Russell Seymour, Chairman of the British Association for Sustainable Sport and sustainability manager at Lord's Cricket Ground, wrote the foreword to the report.

He said: “This is a wake-up call not just for cricket, but for all sport. For every player suffering, there are many more fans having to work and go about their daily lives in these increasingly harsh conditions. Sportspeople are not by nature bystanders and we can and must react to avoid the crises approaching us. At Lord’s we have set out on that journey switching to 100 per cent renewable wind energy, but there is much more for us all to do.”