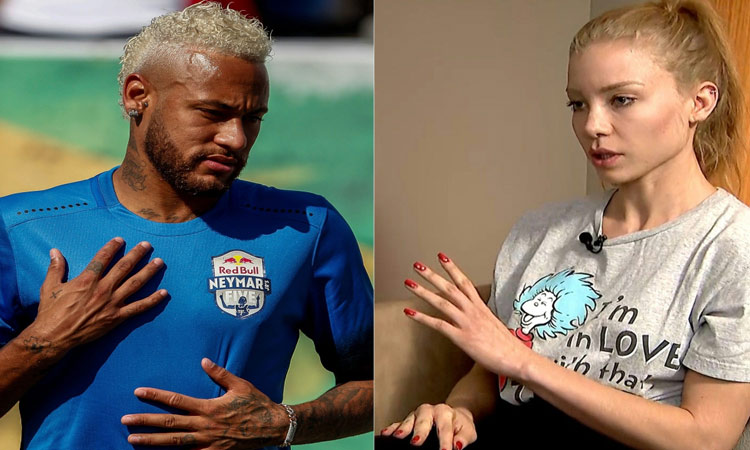 In this combination of file pictures, Neymar (L) reacts as he plays in a five-a-side football tournament and Najila Trindade Mendes de Souza speaks during a television interview in Sao Paulo. File / AFP

Police in Sao Paulo said they will bring extortion and slander charges against a Brazilian model who accused football star Neymar of rape.

Najila Trindade filed a rape complaint with Sao Paulo police upon her return from a trip to Paris in May in which she said she was assaulted by Neymar following a pre-arranged meeting.

A judge dismissed the case in August, citing insufficient evidence.

Instead, Sao Paulo prosecutors said in a statement that investigators had found "indications of slanderous denunciation and extortion" in the woman's accusation.

A final decision on whether to prosecute Trindade will be left to a judge.

Neymar, the world's most expensive footballer, has always protested his innocence, saying their relations were consensual.

The case complicated an already tumultuous year for the 27-year-old Brazil star, who has yet to play for his club Paris Saint-Germain this season following injury and reports of an aborted return to previous club Barcelona.

On Friday, Neymar played his first game since suffering an ankle injury in June, grabbing a second-half equalizer for Brazil in a 2-2 friendly draw with Colombia.