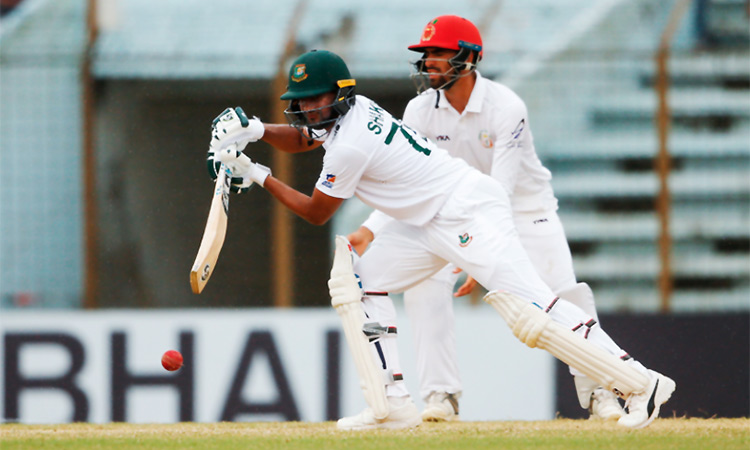 Bangladesh captain Shakib Al Hasan plays a shot against Afghanistan during the fourth day of their one-off cricket Test in Chittagong on Sunday. File / Agence France-Presse

Bangladesh skipper Shakib Al Hasan has taken full responsibility for their shocking home defeat to Test rookies Afghanistan in the one-off match at Chattogram and says it would be best if someone else took over the captaincy.

The 32-year-old all-rounder, widely regarded as the best cricketer Bangladesh has ever produced, took the test captaincy in 2017 from Mushfiqur Rahim for his second stint at the helm after leading them between 2009 and 2011.

War-torn Afghanistan, playing only their third match after being inducted as a Test-playing nation two years ago, completed a famous victory by defeating Bangladesh by 224 runs with 3.2 overs left on the final day on Monday.

“It will be best if I didn’t have to lead,” Shakib told reporters after the match. “I personally believe it will be good for my game.

“And if I have to continue leading, then obviously there is a lot to discuss about (with the board).”

Shakib was the lone shining light for Bangladesh during the 50-overs World Cup in England, finishing third on the run-getters’ list with 606 from eight innings while also picking up 11 wickets with his left-arm orthodox spin bowling.

Following the World Cup he took a break during Bangladesh’s dismal tour of Sri Lanka, where they lost all three one-day internationals but his return failed to inspire the side to victory against Rashid Khan’s Afghanistan.

Heavy showers allowed little play on the final day, leaving Afghanistan with a little more than 18 overs in the final session to take the remaining four wickets and force a result, while Bangladesh had high hopes of avoiding defeat with Shakib unbeaten on 44.

However, he edged spinner Zahir Khan off the first ball of the session while attempting a cut shot to allow Afghanistan their big breakthrough.

“I am really disappointed,” Shakib said. “The whole blame goes on my shoulders.

“I was very nervous when I came out to bat, and got out the first ball and it was my fault. I should have taken more responsibility and could have avoided the cut shot.

“We had to play only one hour and 10 minutes, and I got out the first ball. So it became harder for the team. The dressing room would have felt more comfortable if I had stayed out.”