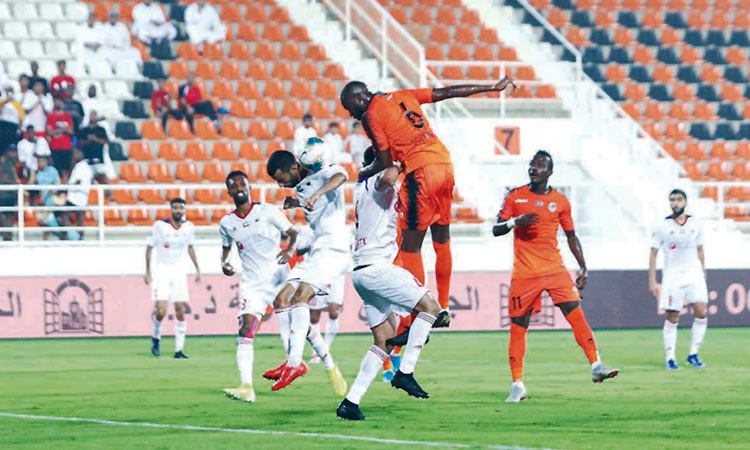 Players of Sharjah and Ajman in action during their Arabian Gulf Cup match on Saturday.

The King looked dangerous and keen on getting the win since the early minutes of the game. In a brilliant team move, Sharjah players played a number of passes inside Ajman’s box before the ball to Ryan Mendes, who dribbled past two defenders but failed to finish in the back of the net in the fourth minute.

The 29-year-old Cape Verdean soon got his name on the scoresheet. He rocketed a free-kick from outside the box past Ajman keeper Ali Al Hosani to make it 1-0 in the 24th minute.

The King’s maintained their good start to the game, and added their second of the night only 10 minutes later. Following a defensive blunder, a long-range ball fell to Gomes outside the box. The 27-year-old Cape Verdean beat his markers and finished past the onrushing keeper.

In the dying minutes of the first half, Gomes wasted a chance to double his tally and add the third for Sharjah after his effort from inside the box hit the woodwork as the King went into halftime ahead 2-0.

After the restart, Sharjah looked as sharp as they’ve had in the first half and they further extended their lead 10 minutes after the break. Second half substitute Igor Coronado found the ball in midfield following an error from Ajman players, and launched a counterattack before chipping the ball over Ali Al Hosani.

Gomes eventually got his brace when he found the back of the net six minutes later. After a one-two play with Coronado, the Cape Verdean struck the ball beyond the helpless keeper to make it 4-0.

While Sharjah seemed to have secured the three points, they continued to push forward hoping to get a bigger win. And with 15 minutes to go, they added a fifth goal. It was Gomes again as he completed his hat-trick with a header into the back of Ali Al Hosani’s net.

Four minutes later, Ajman came close to netting what could have been a fantastic consolation goal. A spectacular scissor kick from Godwin Mensha hit the woodwork before it fell to keeper Adel Al Hosani.

This marks the King’s first win of the season after they suffered two defeats against Bani Yas and Al Wahda. They now move to fourth place on three points, one above sixth-placed Ajman.

The Oranges succumbed to their first defeat of the campaign after drawing with Hatta and Fujairah.

Meanwhile, Yahya Al Ghassani’s opener was cancelled out by Pedro Conde’s goal as Al Wahda and Bani Yas played out a 1-1 draw at Al Nahyan Stadium. Bani Yas looked more dangerous in the early stages of the game, and created problems for Al Wahda’s defensive line. Only two minutes into the match, Sultan Al Shamsi came close to opening the scoring but his effort went few inches wide.

While the Sky Blues controlled the possession and were more active in Al Wahda’s final third, they failed to find the back of the net.

Around the quarter-hour mark, Pedro Conde almost made it 1-0 for Bani Yas. However, his effort lacked accuracy as the game remained deadlocked at 0-0.

Al Wahda keeper Rashed Ali pulled off a good save on the half-hour mark to deny Ayanda Patosi from netting the opening goal. Ten minutes later, Pedro Conde was denied by the woodwork after an impressive individual work from the Spanish forward.

As the first half seemed to be headed for a 0-0 draw, Al Wahda grabbed a late goal as they opened the scoring just one minute before the break. After Abdulla Anwar was awarded a penalty for a foul inside the box, Ghassani converted from the spot to put his side in front.

The Sky Blues needed only four minutes after the restart to level the scoreline. After an impressive teamwork, the ball fell to Suhail Al Noobi who passed to Pedro Conde inside the box and the latter tapped the ball past Ali to make it 1-1.

Bani Yas continued to push forward, hoping to take the lead. However, their efforts either lacked the accuracy or were denied by Ali.

On the 90-minute mark, Ahmed Abunamous, who replaced Shamsi in the second half, missed a chance to net the winner.