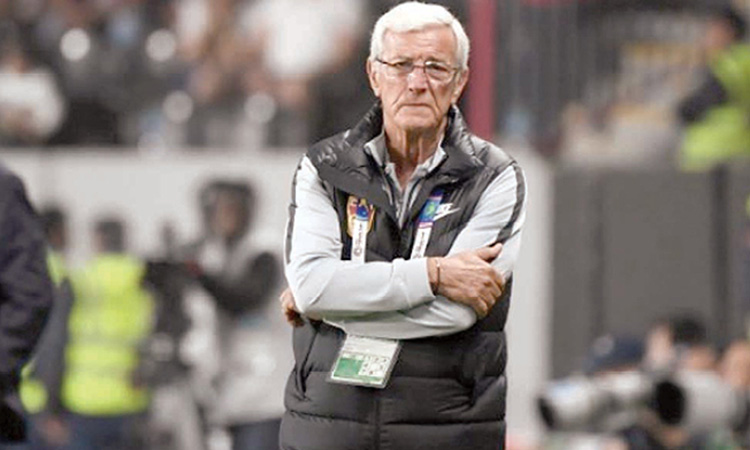 Marcello Lippi has said that he will quit for a second time if he fails to guide China to the 2022 World Cup. File / Agence France-Presse

The 71-year-old Italian World Cup winner returned as coach of China in May just four months after leaving.

“When I arrived at Evergrande I told them you are the strongest, you don’t need a world champion coach to win another championship,” said Lippi of his previous coaching spelling with Chinese giants Guangzhou Evergrande.

“But to become an international club you need to be tight, compact, aggressive, fast, you need to play intensely and even without ball.

“And that is also what I have asked the national side and it seems to me that they are now making us see different things.”

Former Juventus, Inter Milan and Napoli boss Lippi has said he will quit for a second time if he fails to guide ambitious China to the 2022 World Cup.

The 30-year-old has been included in Lippi’s squad for their upcoming tie against the Maldives on Tuesday after being granted citizenship, becoming the first player without Chinese heritage to be selected to play for the country.

And after helping Guangzhou win the ACL title in 2013 and 2015 while also claiming four Chinese Super League titles – three with Guangzhou and one with Shanghai – he is confident he can boost China’s FIFA World Cup qualification hopes.

The long road to Qatar starts this month.

China will open against the Maldives in Group A on Sept. 10 before playing both Guam and the Philippines in early October and Syria on Nov. 14.