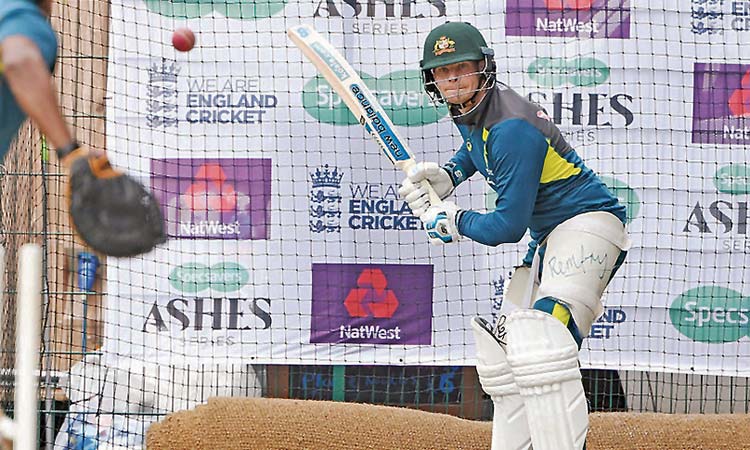 Australia’s Steve Smith bats in the nets at Old Trafford on the eve of the fourth Ashes Test against England. Agence France-Presse

Australia head into the fourth Test at Old Trafford starting Wednesday hoping Steve Smith and the boxer Muhammad Ali can revive their campaign following the hurt they felt at having the Ashes “stolen” from them by England.

The tourists were on the brink of retaining the Ashes only for Ben Stokes’s superb 135 not out delivered England a stunning one-wicket win in the third Test at Headingley.

Stokes’s heroics have left the five-match series poised at 1-1 with two to play.

Australia captain Tim Paine meanwhile said thoughts of how to outwit Ben Stokes keep him awake at night. England were nine wickets down with 73 runs required before Stokes’ swashbuckling innings almost single-handedly kept England in the series and denied Australia a win that would have ensured the tourists retained the Ashes.

“He’s a class player, and he’s really confident at the moment. He’s going well. Like I said, we’ve got some plans for him -- but we’ve just got to execute them a bit better,” he said.

Paine believed spinner Nathan Lyon has troubled Stokes at various times, but he has urged his fielders to provide better support than they did at Headingley.

“I think Nathan has actually bowled really well to him. He’s created a number of chances each time he’s bowled to him.

“But the other side of it is we hold our chances when Nathan is bowling to him. If we can do that, I think he can open the game up for us through that middle order. The last two tests in particular, we’ve let Nathan down a bit with our fielding,” he said.

Paine did however engage in some self-criticism about the way the last test got away from his side.

“We made some mistakes, it happens. We have addressed it as a team and spoken about it honestly. I was certainly one of those people who made mistakes. I would have done some things differently with my field placings,” he said.

“There were times, looking back at it, where it was obvious I should have had the field up and allowed Ben to hit a couple of boundaries so we had more balls at the tailender (Jack Leach).

“That’s the main thing I would have done differently. It happens in cricket and we have moved on, learnt from it, and we are ready for another great test match.”

“He got his bike stolen and that was the fire he needed to become the greatest boxer of all time,” said Langer.

“Now we’ve got to work out what we’re going to do, and use that as fire.

“We’re not going to feel sorry for ourselves and let it slip,” added Langer, aiming to oversee Australia’s first Ashes series win in England for 18 years.

Australia will make at least one change, with star batsman Smith returning from the concussion he suffered after being hit by a 92mph Jofra Archer bouncer that ruled him out of the third Test.

Fast bowler Mitchell Starc will hope to be selected for his first Test of this Ashes on what is set to be the quickest pitch of the series -- a surface that should also suit Nathan Lyon as the off-spinner tries to recover from fumbling what would have been a match-winning run out in Leeds.

Langer was confident Smith could overcome any doubts he may have felt after being felled by Archer.

“When you get hit, it’s always a little voice on your shoulder. You’ve got to have a good strategy and he works the game out better than anyone I’ve ever met in my life,” said Langer.

“If anyone’s going to get over any little demons it’ll be Steven.”

England meanwhile have made one change in personnel to their side for the fourth Test against Australia at Old Trafford, with fast bowler Craig Overton replacing the dropped Chris Woakes.

Somerset quick Overton was only drafted into the squad after it was confirmed James Anderson, England’s all-time leading wicket-taker, was ruled out with a calf injury.