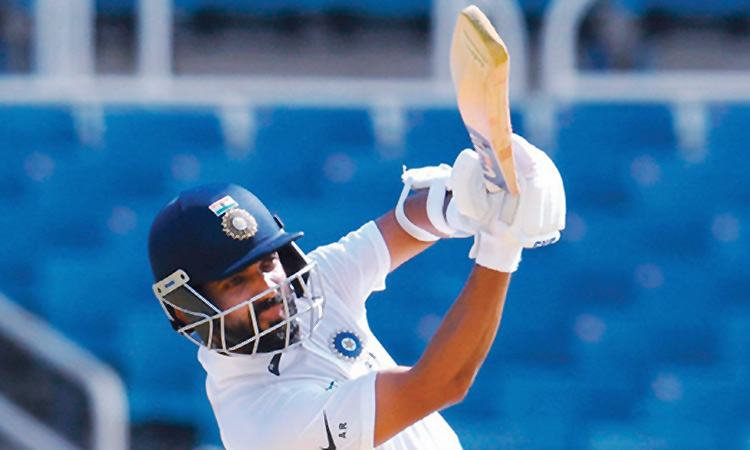 Ajinkya Rahane of India plays a shot against the West Indies during their second Test on Sunday. Agence France-Presse

India moved closer to a Test series and tour sweep of the West Indies, reducing the home side to 45 for two at stumps after setting them the improbable target of 468 on the third day of the second and final Test at Sabina Park in Jamaica on Sunday.

Having declined to enforce the follow-on after the Caribbean team were dismissed at the start of the day for 117 to trail by 299 runs on first innings, Indian captain Virat Kohli declared his side’s second innings at 168 for four in the day’s final session.

Left to negotiate 13 testing overs from the tourists’ pace attack before the close of play, West Indies lost openers Kraigg Brathwaite and John Campbell to Ishant Sharma and Mohammed Shami respectively, leaving Darren Bravo - who survived a blow on the helmet in the final over of the evening from Jasprit Bumrah - and Shamarh Brooks to carry the fight into the fourth day.

Yet as much as India’s overall quality in all departments of the game once again threatened to overwhelm the West Indies, it was the performance of senior home fast bowler Kemar Roach which highlighted another eventful day.

Roach spearheaded the effort to limit India’s search for quick runs and a timely declaration in the afternoon session, taking three for 28 including a burst of two wickets off successive deliveries in which he claimed the prized wicket of Kohli first ball.

Having removed Mayank Agarwal before lunch, the 30-year-old’s sustained pace and accuracy accounted for the other opener, K.L. Rahul, before despatching the Indian leader with his next delivery.

Both were caught behind in identical fashion and it could have gotten even better for Roach and the West Indies as he came within millimetres of matching Bumrah’s hat-trick of the previous day. His first delivery to new batsman Ajinkya Rahane took an inside-edge and flew past the stumps on the way to the fine-leg boundary.

Roach’s three wickets elevated him to ninth on the list of all-time leading wicket-takers in Tests for the West Indies with 193 victims, one ahead of the legendary Wes Hall, who was the consistent spearhead of the dominant Caribbean teams of the 1960’s.

Jason Holder then prised out Chesteshwar Pujara to reduce India to 57 for four before first innings century-maker Hanuma Vihari joined Rahane in an unbroken fifth-wicket stand of 111, the pair completing half-centuries to prompt Kohli’s decision to close off the innings and give his bowlers an hour to make inroads into the West Indies batting line-up.

Earlier, Roach was last out in the West Indies first innings as the lower order offered a bit more resistance on the third morning than the frontline batsmen had shown late on day two when Bumrah’s hat-trick highlighted the demolition job by India’s fast bowlers, reducing their opponents to 87 for seven at the close of play.

Bumrah failed to add to his six-wicket tally from the day before and it was left to the other frontline bowlers - Shami, Sharma and spinner Ravindra Jadeja - to eventually claim the last three wickets after 75 minutes’ play.