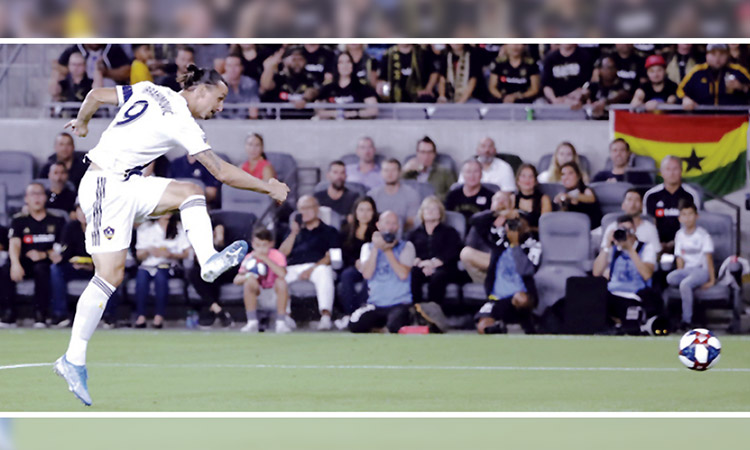 Former Sweden and Manchester United striker Ibrahimovic netted a brace in a dramatic opening spell at LAFC’s Banc of California Stadium in Los Angeles that saw the Galaxy take a 3-1 lead early on.

Ibrahimovic opened the scoring for the visitors after only two minutes, when new Galaxy loan signing Cristian Pavon surged forward from near halfway.

The former Boca Juniors midfielder burst into space before splitting the LAFC defence with a superb pass for Ibrahimovic, who shot first time into the bottom left hand corner to make it 1-0.

LAFC however were on level terms in the 12th minute when Diego Rossi’s header across the face of goal was met by Latif Blessing who bundled home for 1-1.

The Galaxy however were back in front within three minutes when Ibrahimovic again sprang the offside trap before rounding LAFC goalkeeper Tyler Miller and tapping into an empty net.

Argentine midfielder Pavon again punished slack LAFC defending, cutting in from the left all too easily and rifling a low shot past Miller for 3-1.

Blessing added a second in stoppage time at the end of the first half when a shot from Carlos Vela deflected into his path inside the penalty area, gifting the Ghanaian forward a simple finish.

Mexico striker Vela equalised for LAFC in the 53rd minute, collecting a pass from Mark Anthony Kaye to score.

LAFC are now 19 points clear at the top of the Western Conference standings, with 62 points from 26 games.

The Galaxy are fifth in the standings with 42 points from 26 games.