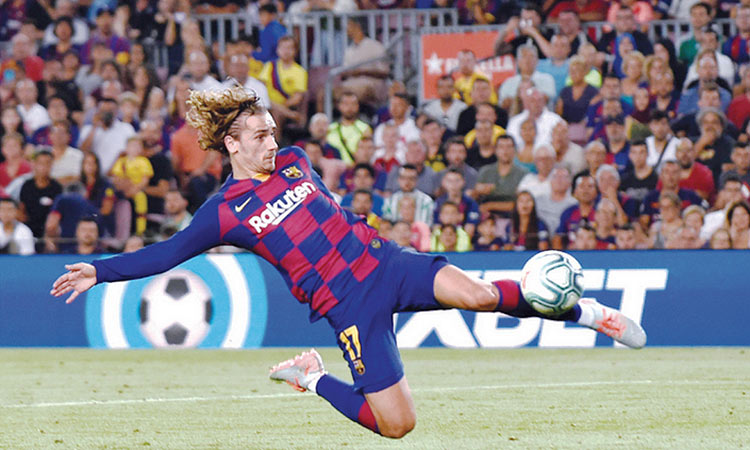 Antoine Griezmann scores against Real Betis during their Spanish League match at the Camp Nou Stadium in Barcelona. AFP

Griezmann imitated the basketball superstar by tossing confetti into the air to celebrate his second at Camp Nou, a curling effort into the corner that he said was inspired by watching Messi.

“I saw Leo do this in training, so I tried to copy him,” said Griezmann.

“And for the celebration, I like the ritual that LeBron did so we tried to do it as well.”

Yet Griezmann was the star, if only for the night with Messi in the stands, the Argentinian still short of fitness following a calf injury. 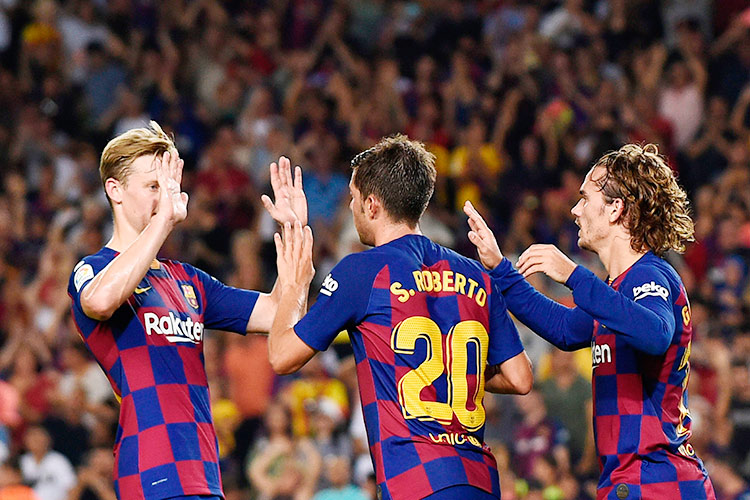 A brilliant Barcelona performance also delivered a resounding response to the doubts arising from their defeat by Athletic Bilbao last weekend, among them a reliance on Messi, the need for Neymar and the future of Ernesto Valverde as coach.

But as Carles Perez, Jordi Alba and Arturo Vidal made it three, four and five, the gloom was forgotten, along with Nabil Fekir’s opener in the 15th minute, that had Betis level at half-time.

“After a defeat, there is always a big reaction,” Griezmann said.

“We really wanted to play another game and when so many players are missing, the team steps up.”

Loren Moron slammed a late strike into the top corner for Betis but by then the game was up as Barca ensured no further ground was lost on Atletico Madrid, who beat Leganes 1-0 earlier on Sunday, or Real Madrid, who were held to a 1-1 draw on Saturday by Real Valladolid. 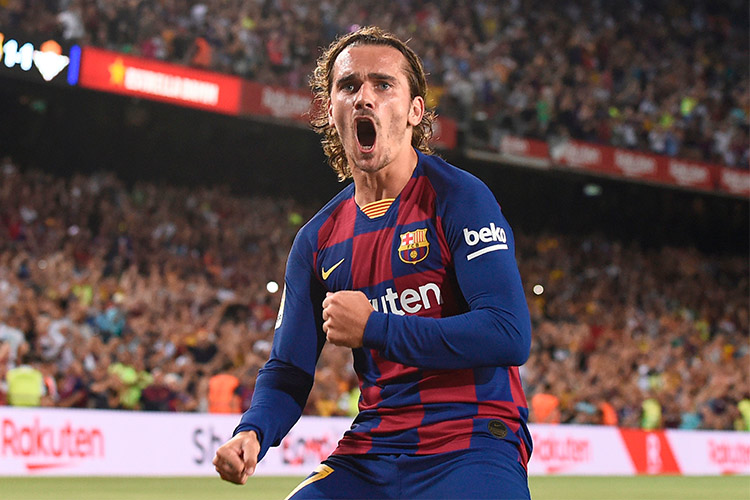 Barcelona will hope to have Messi back for the trip to Osasuna next weekend but with Luis Suarez and Ousmane Dembele both out for longer, Griezmann’s statement display was timely.

Whether it also affects the club’s attempts to prise Neymar from Paris Saint-Germain remains to be seen.

“I have to admit today was an important day for Antoine,” said Valverde.

The crowd also enjoyed a goal from the 21-year-old Perez, making his first Barca start, and a substitute appearance from Anssumane Fati, who at 16 became the second youngest player ever to play for the club in La Liga.

Sergio Busquets was at fault for Betis’ opener as he gave the ball away, allowing Fekir to drive in his debut goal since he moved from Lyon in July.

But Barca were undeterred and after Rafinha missed an excellent chance to equalise, Griezmann took over, volleying in on the stretch four minutes before half-time, past the weak hand of Dani Martin.

If Griezmann’s first owed something to the goalkeeper, his second was unstoppable. He collected the ball 25 yards out and used Sidnei as a marker to bend his shot around the defender and inside the far post. 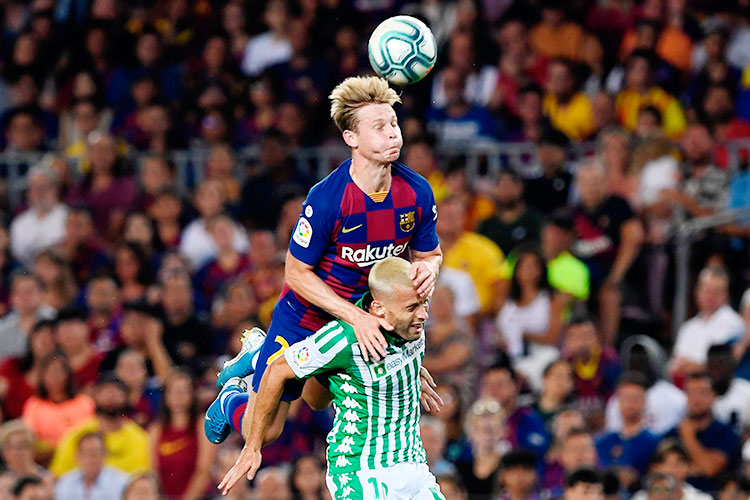 Griezmann ran to the corner where confetti was poured into his hands. He threw it into the air above his head.

Barca were relentless as Perez steered a third into the bottom corner and Alba made it four, latching onto a superb Busquets pass inside the full-back.

There was still time for two scintillating strikes, the first from Vidal, who was slid in by Griezmann, and the second by Loren, who was given too much space. It was no more than a consolation.

Barcelona stay behind Atletico, who maintained their perfect start with another 1-0 victory, this time over Leganes as Vitolo came off the bench to score a second-half winner at Butarque.

The 19-year-old’s perfectly-timed pass provided set Vitolo free while Felix had been picked out by Kieran Trippier, who was faultless on his second Atletico start.